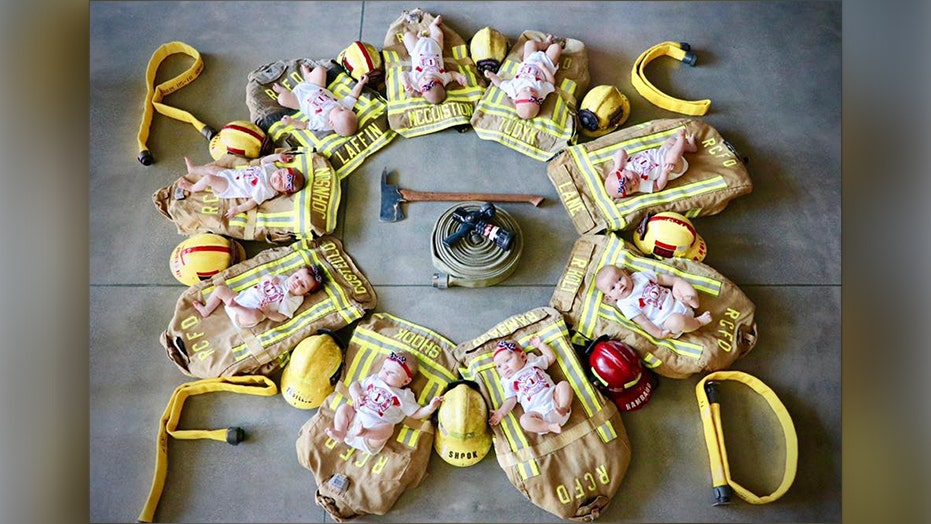 A California firehouse welcomed nine tiny members into their family in recent months, and celebrated their baby boom with a touching photoshoot. The seven girls and two boys were all born between March and July, and posed with their Rancho Cucamonga firefighter dads for the shoot.

“Say hello to Rancho Cucamonga Fire’s newest little family members!” the Fire District wrote on its Facebook page. “Between March and July of this year, nine babies were born in the department and we couldn’t pass up the opportunity to capture this special moment. We are thrilled to see our RCFD fire family keep growing!”

The babies were all born between March and July of this year.  (Rancho Cucamonga Fire District)

The post, which has been shared over 1,000 times, featured five photos of the newborns and their dads, including one in which they were accompanied by their proud moms. Another photo saw all nine babies in matching onesies and posed in a circle on their respective dad’s jacket.

Commenters were quick to label the photos “precious” and “priceless.”

The babies all donned matching onesies for the photos. (Rancho Cucamonga Fire District)

Last year, another fire station in Florida welcomed nine babies in a 10-month span, which inspired a photoshoot of their own.

The Davie Fire Rescue photos also featured one with the babies posed on their respective parent’s jacket while wearing matching onesies.