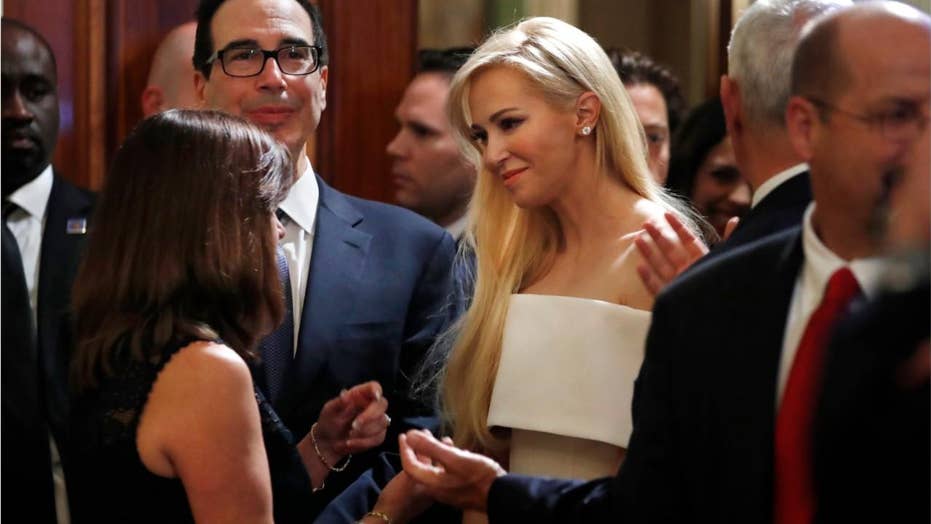 Louise Linton is taking aim at the Trump administration.

Linton, a Scottish actress and the wife of current Treasury Secretary Steven Mnuchin, voiced her displeasure over news of a trophy hunter who was allowed to import a lion’s head into the country — the first instance of such an import since the Trump administration reversed an Obama-era policy that banned trophy hunters from doing just that.

In an Instagram post shared this week, Linton stated, “Americans should not be permitted to kill exotic animals for fun!” She then included language from part of a press release issued by the Center for Biological Diversity in September.

“The Trump administration has authorized a U.S. hunter to import a lion trophy from Tanzania — the first allowed from that country since lions were given protection under the U.S. Endangered Species Act in January 2016,” reads a passage from the press release that Linton shared on Instagram. “A Florida man received permission to import the lion’s skin, skull, claws and teeth, according to U.S. Fish and Wildlife Service records belatedly released under the Freedom of Information Act.”

She then instructed followers to urge Congress to pass the Conserving Ecosystems by Ceasing the Importation of Large Animal Trophies Act, or the CECIL Act (named after the Cecil the Lion, who was killed by an American trophy hunter in 2015), which would restrict the importation of sport-hunting trophies from endangered or potentially endangered species.

The Center for Biological Diversity’s press release concerning the hunter who imported the lion — which utilized information obtained the U.S. Fish and Wildlife Service — also shared its concerns, as well as the Humane Society’s concerns, about what this import may mean for the future of trophy hunting.

“We’re waiting for the other shoe to drop, and it may land on Tanzania’s elephants,” said Tanya Sanerib, the international legal director at the Center for Biological Diversity.

Linton, seen here at the swearing-in of husband Steven Mnuchin as the secretary of the treasury, had previously said she was “very upset” by the administration’s efforts to rewrite federal rules on big-game hunting. (Mandel Ngan/AFP via Getty Images)

Proponents of the Trump administration’s ruling on the importation of lion and elephant trophies had argued that the move would benefit the conservation efforts of the species.

Opponents, however, say that’s not the way it would work in the case of trophy hunting. The Center for Biological Diversity, for one, argues that trophy hunters target pack leaders for their mature appearance and manes, and once the pack leader dies, the new one will kill the old leader’s offspring, which only further thins their numbers.

Trump himself, too, once decreed the hunting of elephants a “horror show” in a 2017 tweet, just months before his administration decided once again to allow the importation of elephant body parts from trophy hunts.

The Fish and Wildlife Service now allows the import of parts of some elephant, lion and bontebok (a species of antelope) on a case-by-case basis.

Linton has not publicly followed up to this week’s Instagram post regarding the importation of a trophy hunter’s lion. Her current Instagram biography lists her as “Not a Republican. Not a Democrat. Just a bipartisan and filmmaker who loves everyone.”