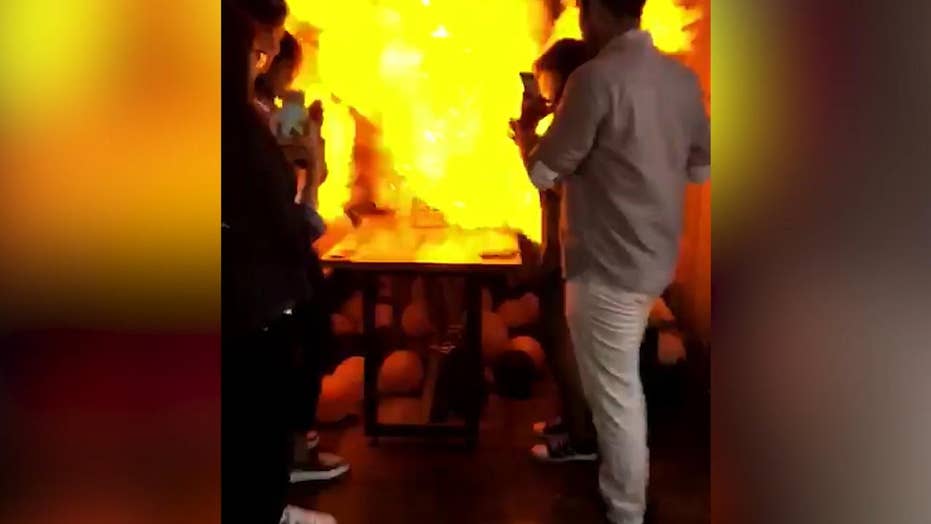 Video captures the moment balloons filled with hydrogen explode after a woman lights a birthday cake in Mysore, India.

This is the moment a woman was horrifically burned after balloons filled with hydrogen exploded in a fireball while she was lighting her 21st birthday cake.

Sanjana, 21, was left with burns to her hands, leg and face after hydrogen balloons caused a small inferno at a hotel in Mysore, India.

Footage shows the birthday girl in a light blue dress standing at the head of the table surrounded by half a dozen pals. Her friends gather around the wooden table with their mobile phones to film Sanjana strike a match to light her birthday cake candle.

HOMELESS MAN SUING BURGER KING FOR ACCUSED HIM OF USING FAKE MONEY, WHICH LANDED HIM IN JAIL

Terrifying footage shows the large candle flames reaching out to nearby red and black hydrogen balloons causing a bright yellow fireball to erupt. Piercing screams are then heard with Sanjana running away.

She was taken to a nearby hospital where she was treated for burns to her hands, legs and face.

City-based event planner Rajeev Shekhar, who was not at the bash, said: "She was lucky to get away with minor injuries.

"We advise our clients to use helium instead of hydrogen balloons as they are non combustible."

The incident happened on April 19.

This story originally appeared in SWNS.