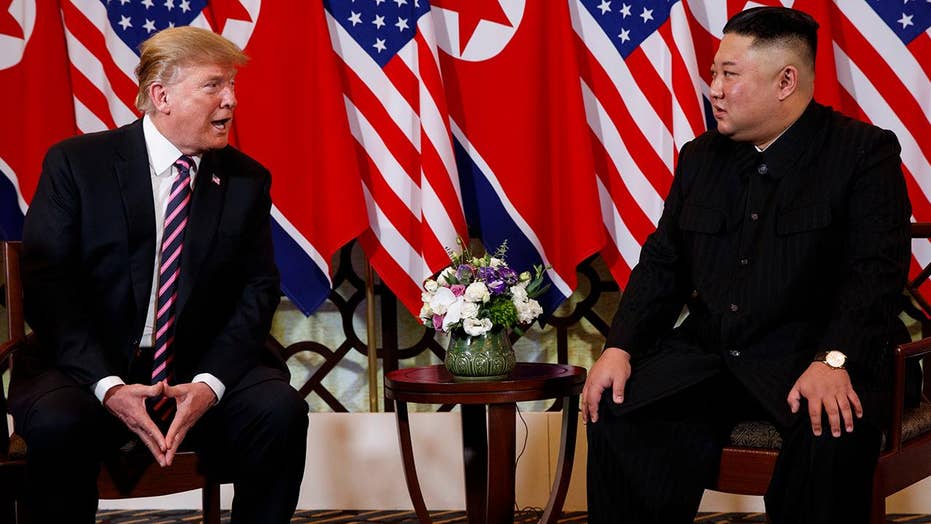 President Trump and North Korean Kim Jong Un kick off their second summit in Vietnam with a handshake and dinner; John Roberts reports from Hanoi.

There were none of his “favorite fast foods” at President Trump’s dinner with North Korean leader Kim Jong Un during their second summit — but rather traditional American and Korean dishes with an upscale twist.

The menu for the “social dinner,” which took place at the Sofitel Legend Metropole in Hanoi at 7 p.m. local time (7 a.m. EST), was officially released by the White House on Wednesday morning.

Guests including White House Chief of Staff Mick Mulvaney and Secretary of State Mike Pompeo, along with North Korean politicians Kim Yong Chol and Ri Yong Ho (and both parties’ respective interpreters) were reportedly treated to such dishes as shrimp cocktail and grilled sirloin with pear kimchi, finished off with chocolate lava cake.

Guests were reportedly treated to such dishes as shrimp cocktail and grilled sirloin with pear kimchi, finished off with chocolate lava cake (iStock)

The official menu, as released the White House, was as follows:

STUDY: THIS TYPE OF MENU CAN TRICK DINERS INTO THINKING THEY'RE MAKING HEALTHY CHOICES

President Trump and Kim Jong Un’s meal lasted approximately 90 minutes, according to the Associated Press, after which Trump departed the Sofitel for a “very busy day,” as he told reporters prior to the dinner.

Before attending their "social dinner," Trump also teased that "a lot things are going to be resolved."

"I hope and I think it'll lead to a wonderful situation long term," he had said of his meeting with Kim. "And our relationship is a very special relationship."

The second summit comes amid a stalemate on denuclearization talks between North Korea and the United States. Trump has signaled some flexibility on his previous demands that North Korea denuclearize before it sees some relief from crushing U.S. and international sanctions.