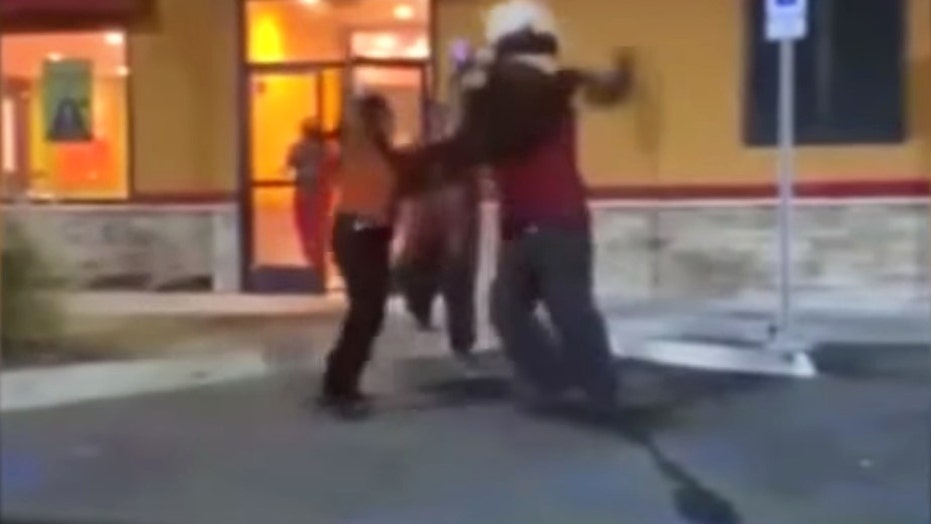 A Popeyes employee who says he was working at the Tennessee restaurant where a colleague body-slammed a female customer in a parking lot has claimed the now-viral video doesn’t tell the full story.

The employee, who wishes to remain anonymous, said what wasn’t shown in the video was the customer, 55-year-old Deborah Staggs, using a racial slur before the assault.

Deriance Ra’Shaiel Hughes, 29, was charged last Friday with felony aggravated assault after he allegedly slammed Staggs onto the ground.

POPEYES FIGHT BREAKS OUT BETWEEN COUPLES AT CALIFORNIA DRIVE-THRU

“No one’s going to react that way for no reason,” the anonymous male employee told WZTV.

Staggs, he said, started swearing at his general manager after being asked to leave and come back the next day when she claimed she was double charged by the restaurant.

“And then she called her a fat ugly [n-word] and that’s when the whole store was like, whoa,” the employee said. “It stunned me. Like, I knew that racism was still alive in a sorts, but to witness it first-hand in my workplace is kind of new to me.”

POPEYES EMPLOYEE, CUSTOMER THROW TRAYS AT EACH OTHER IN FIGHT CAUGHT ON VIDEO

The employee said he tried his best to de-escalate the situation by holding Hughes back and asking Staggs to leave, but to no avail. The employee said Hughes was especially upset because the woman Staggs was arguing with at the front counter was his sister.

“It’s not like she free-will walked away, she refused to leave the store,” the employee said. “But it still doesn’t give it a right for her to get body-slammed. I don’t condone it. I don’t condone a man hitting a woman, period. I don’t condone racial slurs either, so I feel like they’re all wrong if you ask me.”

Now the employee and others may be out of a job. The station reported the Columbia store now has a “temporarily closed” sign taped to the inside of the front entrance.

The employee said the restaurant has been closed since last Friday after another fight between a few employees that was unrelated to the earlier incident. Popeyes’ corporate office later decided to close the store.