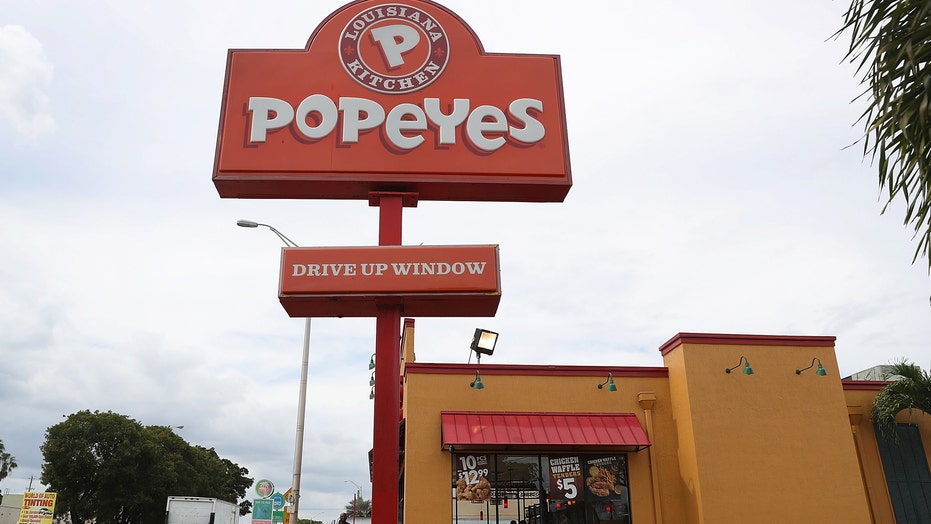 A California woman waiting in line at a Popeyes drive-thru to get her hands on the fast-food restaurant’s popular chicken sandwich captured a fight between two couples on Saturday night.

The viral video, shared by Gigi Drummond on Facebook, has been viewed more than 1 million times.

“Decided to get Popeye's chicken sandwich for my son -- we got front row seats to 'Saturday Nihght [sic] Fights,'" Drummond captioned the series of videos.

The brawl reportedly took place after two couples got into a verbal altercation while waiting in their cars in the drive-thru at the Temecula restaurant.

POPEYES EMPLOYEE, CUSTOMER THROW TRAYS AT EACH OTHER IN FIGHT CAUGHT ON VIDEO

Drummond said a man in a white car became frustrated with an incorrect order, according to KFMB. The unidentified man said he had been waiting for more than an hour and refused to come inside to have the order fixed.

Another man in a black car behind the disgruntled customer honked his horn “really loudly,” she said, which prompted the man in the white car to exit his vehicle and begin shouting at the man and his wife.

The video clips posted to Drummond’s Facebook page captured the fight escalating to a physical encounter, in which both men and their female companions throw punches, and at some point, tumble to the ground in an all-out brawl.

A California woman waiting in line at a Popeyes drive-thru captured a fight between two couples on Saturday night. (Photo by Joe Raedle/Getty Images)

Two uniformed police officers eventually arrived at the scene to break up the slugfest and were seen speaking with the parties involved. Drummond said no one was arrested.

The California incident is one of a string of recent violent occurrences at Popeyes restaurants across the country.

Six juveniles attacked a man in his 50s at a Popeyes restaurant in Silver Spring, Md., on Tuesday night. The juveniles all fled the scene, and no motive for the alleged attack was disclosed.

In a separate Maryland incident, a 28-year-old man was stabbed to death after he allegedly cut a line to order a chicken sandwich at an Oxon Hills Popeyes' location. The suspect was identified on Tuesday as 30-year-old Ricoh McClain.