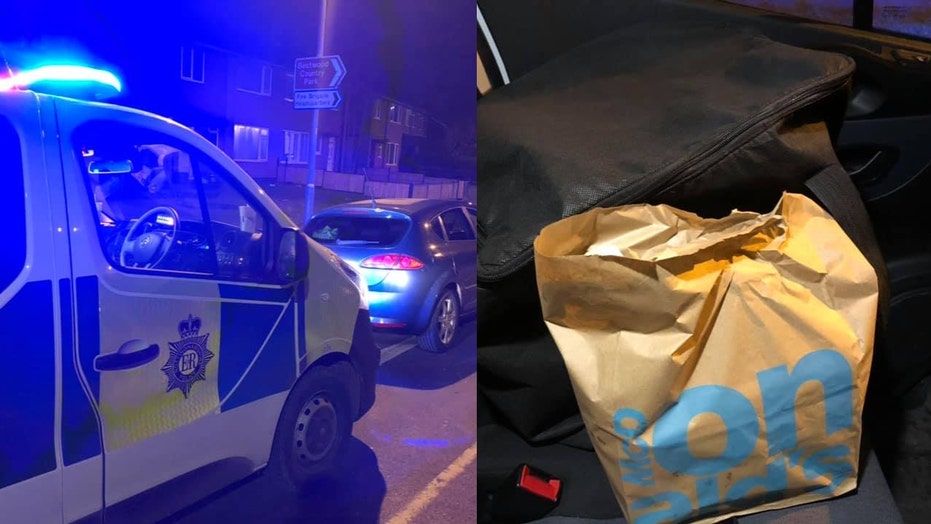 These police officers take their jobs to protect and "serve” seriously.

Officers in the U.K. stepped in to deliver a customer’s stranded McDonald’s order after they pulled over a delivery driver on Tuesday and seized his vehicle.

When Nottinghamshire Police stopped the vehicle they discovered that the driver did not have the “correct” insurance, the department said in a statement posted on its Facebook page.

“Who you gonna call when your delivery driver gets their car seized and #MCGrilled by the local police!?” the post read.

“It’s safe to say that the customer still received their Big Mac and fries in time thanks to our officers who safely dropped off their maccies to the door - and they were simply ‘McLovin’ it.”

The police department shared a photo of the McDonald’s order inside a paper bag. In the post, police also advised drivers not to drive on public roads without adequate insurance. The offense could carry a penalty of prosecution, your vehicle being seized at roadside and a fine up to $6,500.

What’s more, the delivery driver pulled over by Nottinghamshire Police is now in jeopardy of getting six points added on his license, along with a recovery fee, or risk his vehicle being “crushed.”

Though the gesture appeared innocent enough, the post was met with shade and condemnation in the comments section.

“For goodness sake have the police nothing better to do?” one Facebook user commented. “What a lot of nonsense that law is to say that you need specific insurance to deliver someone’s food. Any decent cop would not even blink an eye at that fella.”

Another critic wrote, “The police do not have the correct insurance to deliver that food and I bet they don’t get a fine or 6 points. Practice what you preach!”

There was at least one person, however, who commended the officers for their act of service.

“I LOVE that you still delivered it! Not all heroes wear capes,” the person wrote.