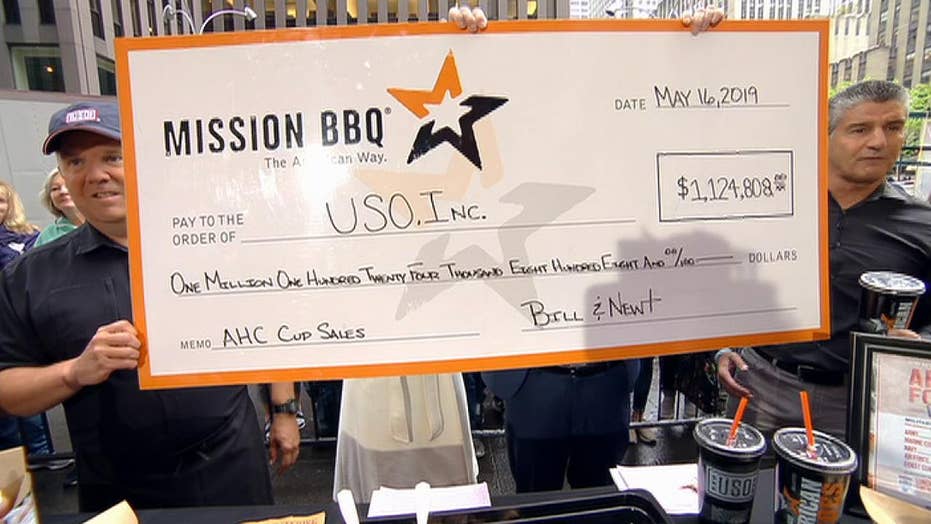 The restaurant chain stops by 'Fox &amp; Friends' to serve up their great food and talk their mission to help America's heroes.

Best friends Bill Kraus and Steve “Newt” Newton opened the first Mission BBQ on the ten-year anniversary of 9/11 with the goal of restoring the nation to what it was before the attack and building a business that reminded people of how fortunate they are to live in the greatest country in the world.

“At Mission BBQ, we are proudly serving those who serve,” the restaurant’s website says.

To that end, each of Mission BBQ’s 80 locations honors America and America’s heroes every day by shutting down the entire restaurant at precisely 12 p.m. to observe the national anthem.

But Mission BBQ doesn’t just honor active service members and veterans with a daily rendition of “The Star-Spangled Banner,” they also give money to military organizations and charities.

On “Fox & Friends” Thursday, Kraus and Newton presented the USO’s Elaine Rogers with a check for $1,124,808 to help men and women in uniform and their families.

The money was raised through sales of Mission BBQ’s American Heroes Cups, with $2 of every purchase going to the non-profit organization.

“USO only has one mission and that’s to serve our military and their families,” Rogers said. “Mission BBQ allows us to do so much. We have resiliency programs, employment, we have music, art, sports therapy. We’re at all the airports, helping our military around the world.”

She said the patriotic sentiment at Mission BBQ is a “family affair,” from the owners to the employees to the patrons.

“[We] love barbecue, but more importantly, we love our country,” Kraus said. “Just wanted to build a business that had some purpose, some meaning, some significance.”