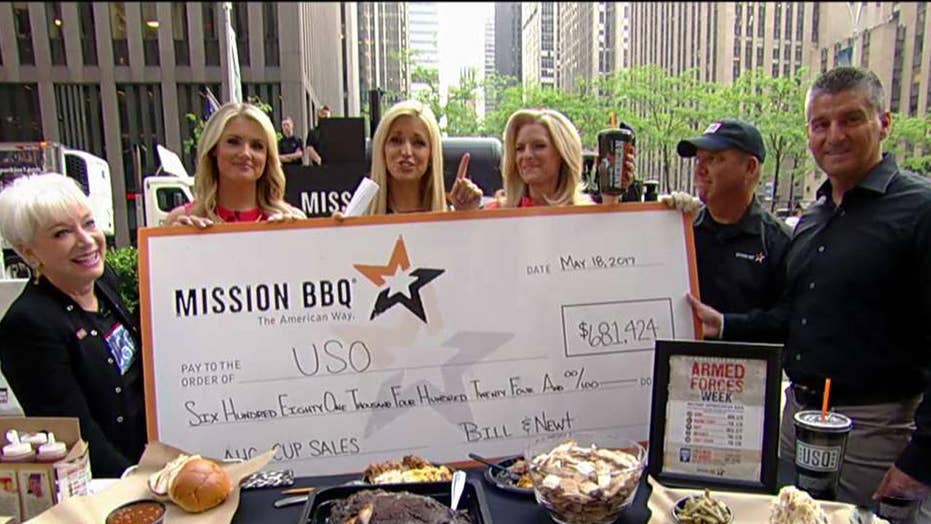 Armed Forces Day is May 20th

As anyone who has eaten lunch at a Mission BBQ can attest, the entire restaurant shuts down every day at precisely 12 p.m. to observe the National Anthem.

“Best two minutes of the day,” explained Bill Kraus, the co-owner of Mission BBQ, during a visit to “Fox & Friends” on Thursday morning.

“We play that anthem because we can, because we’re free and we’re safe,” said Kraus. “And we know there’s a price to that … When you hear people singing and you see people crying, you’re reminded [that] people do care. It does matter,” he added.

But Kraus and his co-owner Steve “Newt” Newton don’t just honor our heroes with a song. They’re also giving back to the armed forces in a big, big way.

Over the last five years, the chain has given over $5 million to military organizations and charities ( they donated $1.7 million in 2016 alone) but they’re not done yet. On Thursday’s “Fox & Friends,” Kraus and Newton met with Elaine Rogers, the president of and CEO of the Metro Washington-Baltimore USO, to present her with a check for $681,424.

“This means that we can truly continue the programs that our USO does around the world,” said Rogers. “Because we really are that Force Behind the Forces. And when you have partners like this, you can get anything done.”

“You guys rock,” she added.

The company is also dedicated to hiring our nation’s veterans. Learn more about the program here.