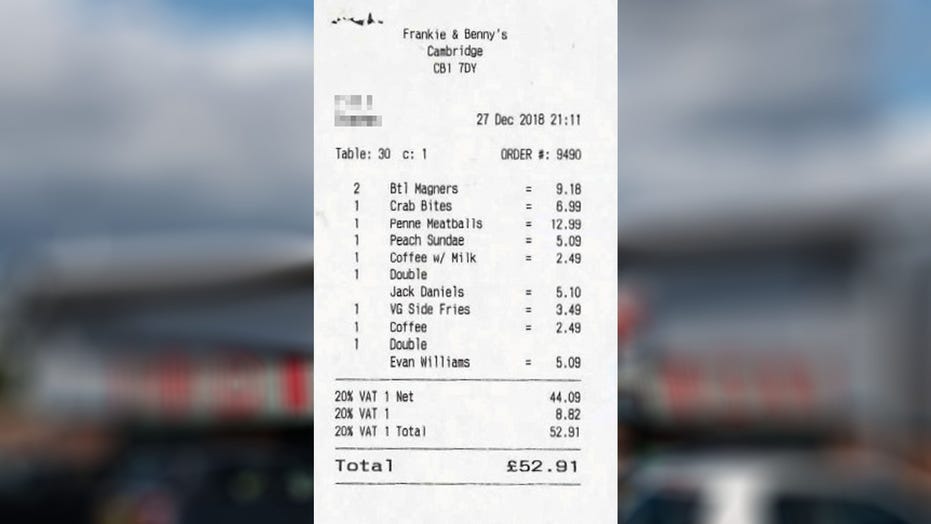 A patron in England is paying the price for trying to eat for free.

After spending over six hours in the establishment, and racking up a bill of just under 53 pounds, or roughly $68.54, the man reportedly refused to pay. When he couldn’t be convinced to hand over the money, authorities were called.

Paul Rockett, who is reportedly homeless, was sentenced to 34 weeks in jail and banned from entering any local restaurant without the means to pay for two years, The Sun reports. News of his sentencing comes more than four months after the incident, which occurred at a Frankie & Benny’s in Cambridge last December, and lasted from 4:40 p.m. in the afternoon until around 11 p.m.

During that time, Rocket ordered crab bites, penne with meatballs, a peach sundae and multiple drinks.

When he was brought the bill, however, he reportedly refused to pay because it had the wrong date on it. A picture of the bill appears to show the correct date. The restaurant eventually had to call on-site security personnel to handle the situation. According to police, Rockett later told them he entered the restaurant “to survive,” The Sun reports.

He was found guilty of making off without payment and was sentenced to 34 weeks in jail.

According to The Sun, police constable Brad Munday said, "Rockett never had any intention, or means, to pay for his food and knew the consequences of dining in Frankie & Benny's. It’s regrettable he’s found himself in this position but, simply put, he broke the law.”