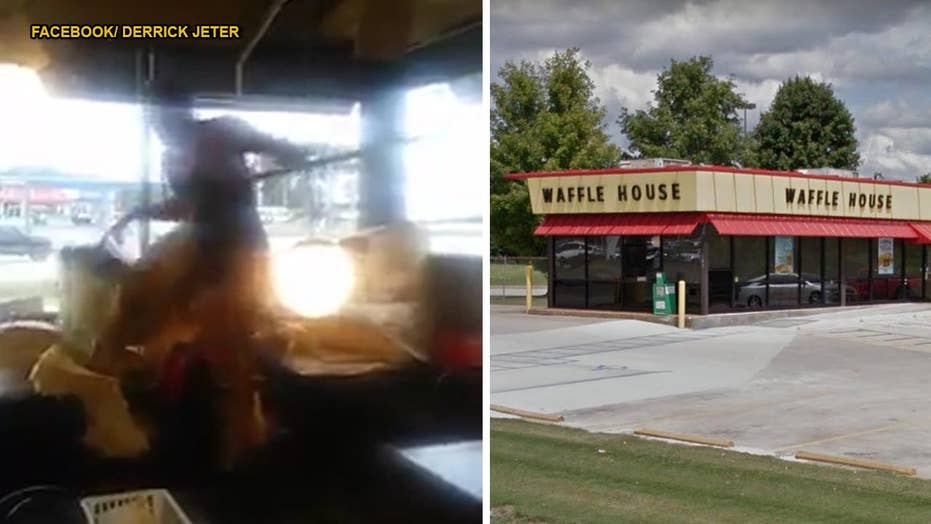 A chaotic scene unfolded at a Waffle House in Tuscumbia, Ala., after a man was filmed crashing down through the drop-down ceiling and shoving past patrons and employees while trying to escape from staff.

Another day, another human being falling through the roof of a restaurant.

A chaotic scene unfolded at a Waffle House in Tuscumbia, Ala., after a man was filmed crashing down through the drop-down ceiling and shoving past patrons and employees while trying to escape from staff on Sunday morning.

Police in Tuscumbia identified the man as 27-year-old Wesley Glenn Bost from Birmingham, and said he climbed up into the ceiling after locking himself in the restaurant’s bathroom, according to WAAY, a news station.

CALIFORNIA WOMAN CRASHES THROUGH RESTAURANT CEILING AFTER ASKING TO USE BATHROOM

Footage taken inside the Waffle House shows the ceiling buckling under the man’s weight before he ultimately falls through onto a table. An employee can be heard shouting, “Don’t go nowhere!” before the man charges into a patron attempting to block his path out of the restaurant.

Another employee tries to hold the door shut to keep the man inside, but he rams his body against the door until he’s able to flee.

The man took off in his car, and later fled on foot, according to WAAY.

Tuscumbia police say the suspect fled before authorities arrived, but that they are aware of the man, and are "obtaining warrants at this time."

“We’re not sure why this gentleman went into the bathroom and crawled up onto our ceiling,” he added. “However, we are aware that some people may be confused as to the meaning of a ‘drop-in’ ceiling.”

Police added that the man broke the restaurant’s sink and toilet, WAAY reports.

Sunday’s incident comes nearly a week after a similar occurrence in Kingsport, Tenn., where a half-naked 26-year-old woman fell through the ceiling of a BBQ joint — twice —before being apprehended by police in the dining area.

In June, a patron at a Mexican restaurant in California also filmed a woman falling through the ceiling and into the kitchen. The patron who recorded the incident described the woman as a “crack head,” though police did not confirm if the woman was on drugs at the time.

A representative for the Tuscumbia police was not immediately available to comment.