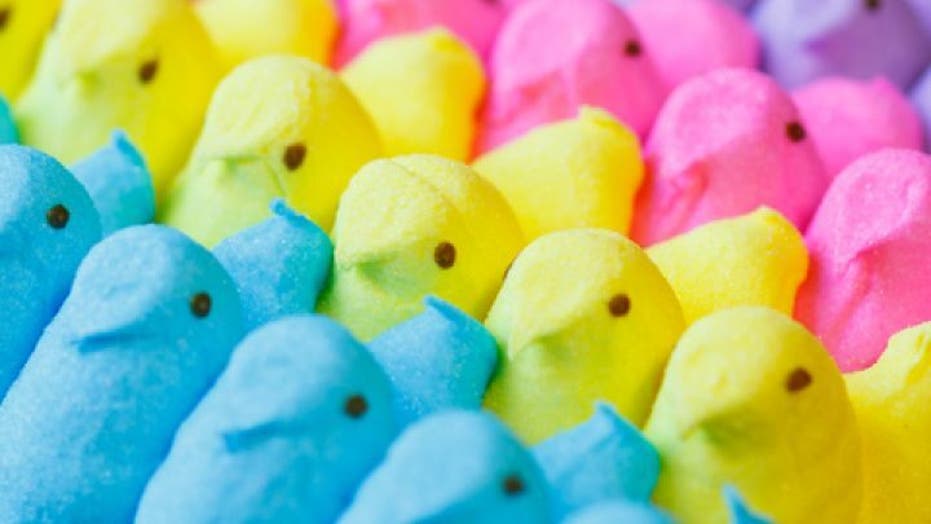 First, coronavirus forced the iconic marshmallow snack to temporarily shut down operations, which has caused delays that have effectively canceled Halloween and Christmas-themed Peeps for 2020. Now, PETA and actor James Cromwell are getting involved in complicating the production of Peeps.

Peeps are made using gelatin, which is pork-derived, the brand shares on its website. James Cromwell and PETA are asking the company to move to a plant-based alternative.  (Just Born)

On behalf of himself and the animal rights organization, the famous actor, and notable vegan, sent a letter to COO David Yale of Just Born, the company that owns Peeps, on Thursday asking that the brand change its recipe.

The marshmallow treats are made the same way many marshmallows and chewy candies are – with gelatin. Gelatin gives the product its squishy chew. Peeps specifically uses pork-derived gelatin, which is derived “from the skin, connective tissue, and bones of animals,” the brand explains on its website. In Peeps' case, the gelatin is from “pork skin and bones.”

In the letter, which was sent to Fox News from PETA, Cromwell starts, writing “the world is in turmoil, and we’re facing many pressing concerns,” before sharing he wants people to continue enjoying Peeps, just without gelatin.

“Demand for vegan food is at an all-time high, and it would be easy to replace gelatin in Peeps with a vegan ingredient such as Geltor's vegan gelatin when full production resumes. Making this switch would broaden your product's appeal, opening up a whole new market while losing none of its taste,” Cromwell claims.

Cromwell continues in the heartfelt letter by reminding Yale that he “starred in the movie “Babe,” and learned about “the intelligence and inquisitive personality of these highly social animals.”

However, Just Born does not seem like its about to jump on the vegan bandwagon.

According to a statement shared with Fox News, Just Born said it has looked into vegan gelatin, but it does not provide "the same great eating experience" as its pork-derived gelatin it uses.

"PEEPS® have been a favorite seasonal candy since 1953 and the marshmallow recipe has always included about 2% gelatin. We are aware that some vegan consumers may have concerns about the gelatin we use. We provide consumers with as much information as possible to help them make informed choices about our products on our packaging and on our website. We have done a great deal of research, analysis and testing using alternative sources of vegan gelatin and have not been able to identify a consistent alternative that provides the same great eating experience that our current gelatin provides," the statement read.

The company resumed full operations in May after being shut down due to the coronavirus pandemic.