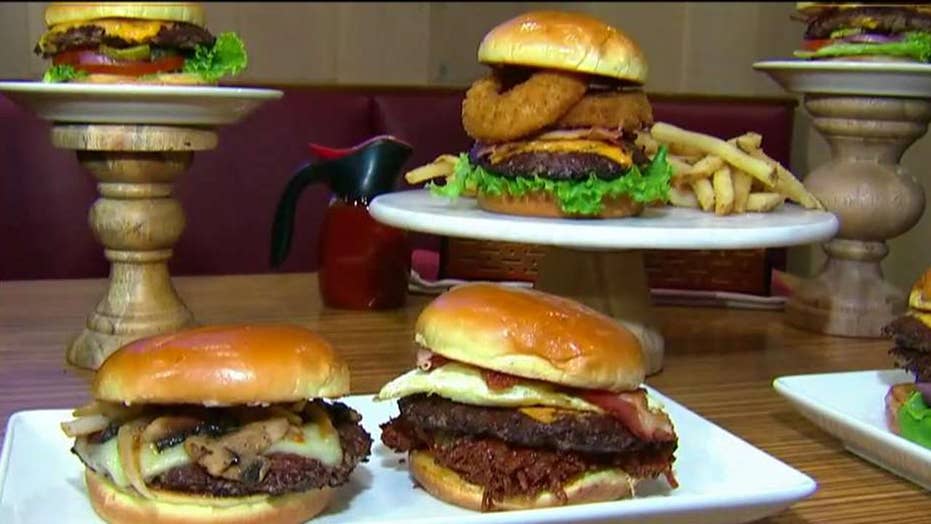 In what must come as disappointing news for anyone hoping IHOP would start offering breakfast burritos or break-dancing classes, the restaurant chain announced Monday on Fox News that its much publicized name change to "IHOb" reflects the debut of its brand-new Ultimate Steakburgers.

'IHOB' LOGO TOO SIMILAR TO THAT OF TAMPON BRAND, TWITTER SAYS

Brad Haley, the chief marketing officer for “IHOb," added that changing the restaurant's name was the "best way to convince [customers] that we are as serious about our new line of Ultimate Steakburgers as we are about our pancakes," per a press release. "We’ve pancaked pancakes for 60 years now so it’s the perfect time to start burgerin’ burgers, and we’re kicking it off by flipping the ‘p’ in IHOP to a ‘b’ for burgers."

IHOP's new menu will include seven new varieties of steakburgers — to be available all day, everyday — including:

As for the restaurant’s name change, IHOP said its new moniker will be in effect for “the time being.” A representative for the brand also confirmed that only its flagship location, in Los Angeles, Calif., will be rebranded as an “IHOb” in honor of the launch. All other restaurants will feature IHOb-themed elements within, but retain their original signage, for at least the length of the "summer campaign."

IHOP's new offerings will include a Classic burger (with or without bacon), the Cowboy BBQ burger and the Big Brunch burger, among others. (IHOP)

News of the restaurant’s name change was originally announced June 4, though the company remained mum on what the “b” would stand for, or whether the change would be permanent.

MAN ASKED TO LEAVE RESTAURANT BECAUSE OF LARGE CROSS NECKLACE, HE CLAIMS

In the week since, Twitter users speculated that the restaurants might be changing its name to reflect new menus more focused on bacon, blueberries or brunch. By late last week, however, self-identified employees of the chain began revealing the burger-based news via online forums and social media platforms.

“I went to IHOP earlier and the waiter was like ‘it’s burgers,” wrote one Twitter user on Wednesday.

Another Reddit user, who claimed to be a manager, had also prematurely revealed the chain’s secret plans, adding that the burgers are “pretty good.”

IHOP's — or IHOb's — new burgers are are currently available with unlimited french fries and a drink starting from $6.99 at participating locations.