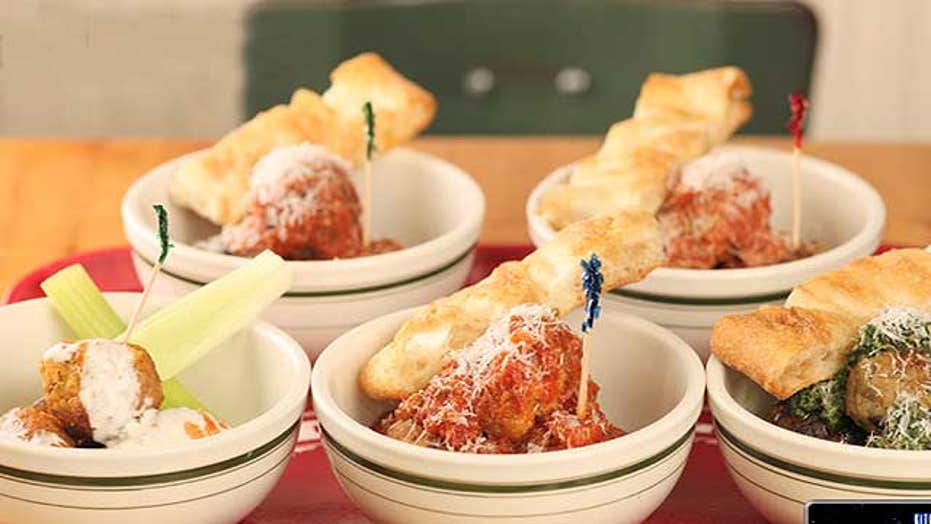 Meatball Shop's Daniel Holzman shows Kitchen Superstars how to make their Kitchen Sink Salad--which has everything but the sink in it.

It’s no secret that everyone loves meatballs, and when two native New Yorkers decided to open a restaurant dedicated to the yummy balls of goodness it was a recipe for success.

The Meatball Shop is the brain child of Daniel Holzman and Michael Chernov, who have been best friends since high school. Chernov is a “front of the house” guy while Holzman found his calling in the kitchen.

“If you told me five years ago that I was going to have to roll 2,000 meatballs a day, I wouldn’t have ever taken the job,” Holzman joked to FoxNews.com’s Kitchen Superstars.

The duo opened their first Meatball Shop location on New York’s Lower East Side in 2010 and have since expanded to five locations across New York City.

“We knew we were going to open up a late night place – it was a place to sop up the booze after the bar,” said Holzman. “But what we didn’t anticipate … (was) groups of 75-year-old grandmas coming together to have lunch and five-year-old birthday parties at the same time.”

The Meatball Shop offers a completely customizable menu sure to please grandmas and drunkards alike. There are five different kinds of meatballs, five different sauces, and a host of ways to enjoy them: in a sandwich, on a salad, even on top of risotto.

“I feel like there are two kinds of restaurants. There’s the kind of restaurant where you want to just close your eyes and say, whoever the chef is in the kitchen I want them to decide what I want to eat because they know best. Then there’s the kind of place you want to go to probably a little more often where you’re like, I want that thing that I know that I love and its consistent,” said Holzman.

The Meatball shop is a simple restaurant with a simple concept, but it resonates with New Yorkers and visitors from around the world who come to enjoy the universally-loved treats.

“We have one rule. Only. Which is have a good time,” said Holzman. “We’re going to serve you something we’re really proud of that is super hopefully delicious and everybody gets to walk away with a smile.”