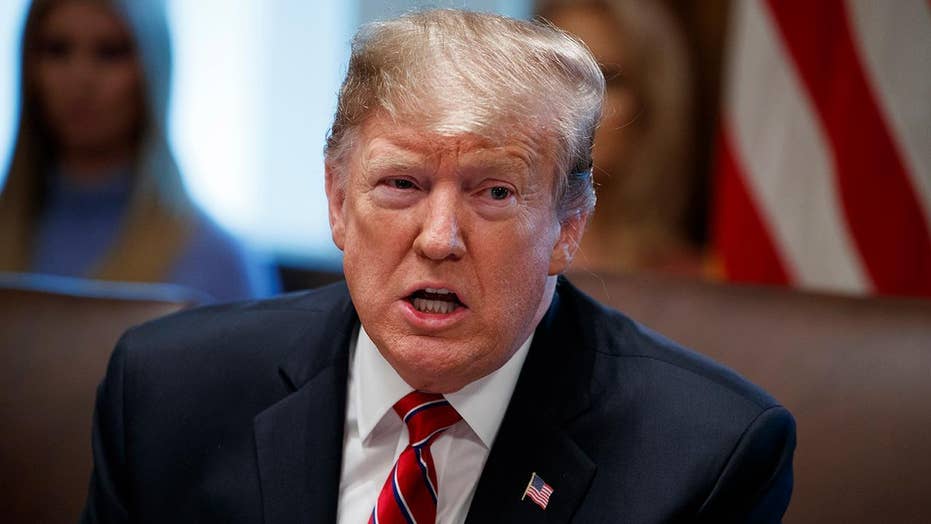 President Trump hints at 'other methods' to fund border wall

White House refuses to directly answer whether the president will sign the bipartisan border security deal; Kevin Corke reports from the White House.

A provocative artist is the proud new owner of a wedding cake favor from the January 2005 nuptials of President Trump and first lady Melania.

Artist and photographer Andres Serrano was the highest bidder when the 14-year-old confection hit the auction block earlier this month — he offered $1,880 for the miniature chocolate cake, which he picked up in person from Boston's RR Auction last week, Vanity Fair reported.

The 14-year-old sweet for sale comes packaged in its original ivory box, stamped with a gold monogram “MDT.” (RR Auction)

Serrano’s most well-known works include photos of corpses, and perhaps most famously, his own bodily fluids: A 1987 image, featuring a crucifix dunked in his own urine, thrust him into a heated controversy and drew outrage from Christian conservatives and lawmakers from the time.

Serrano is staying mum regarding his plans for the Trump-approved dessert.

“I’ve got something on my mind and it’s much more than cake!” he told Vanity Fair of his purchase.

As noted by The Art Newspaper, Serrano once photographed the 45th president in 2003 for his “America” photo series.

When asked about Trump in a 2016 interview with The Guardian, Serrano kept his views to himself.

“I never speak ill of people who’ve posed for me,” the artist said at the time.

When pressed for details regarding his potential creative purposes for the Trump wedding cake in recent days, Serrano remained vague.

"Artists work in mysterious ways. You never know what they’re up to! I don’t like to talk about things until I’m ready to talk,” he told The Art Newspaper on Feb. 12.

According to RR Auction, the “sought-after souvenir wedding cake” – roughly three inches in height and diameter – is an individual chocolate truffle cake decorated with a “single sugar-spun buttercream rose and gold flakes.” The 14-year-old sweet comes packaged in its original ivory box, stamped with a gold monogram “MDT.”

Another wedding cake favor from the Trump’s 2005 nuptials (pictured here) – sold by Julien’s Auctions – was expected to fetch a similarly high sum when it went up for sale in November 2017. (Julien's Auctions)

The souvenir was inspired in design by the actual wedding cake from the big day, a 200-pound yellow sponge with a $50,000 price tag, according to the auction house.