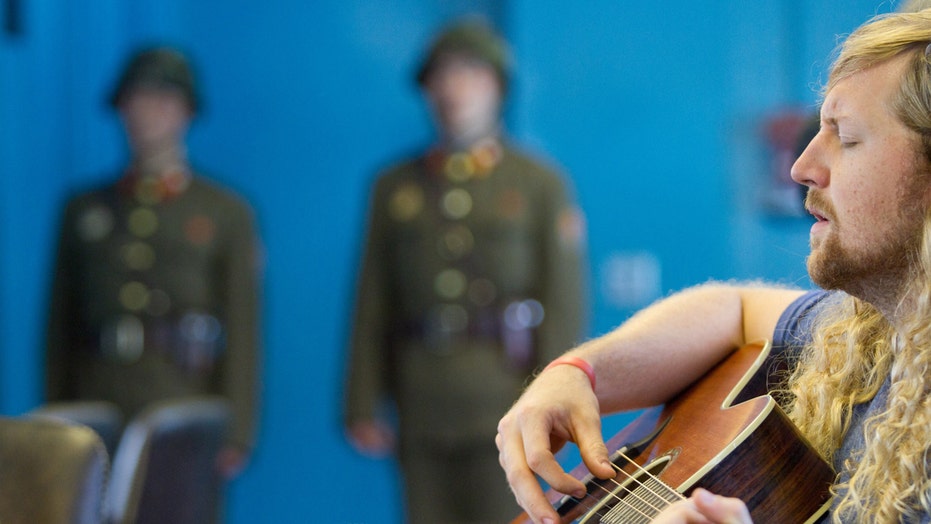 The seemingly spontaneous event happened Sunday following an invitation from the president to Kim Jong Un.

A worship leader celebrated President Trump's historic meeting with Kim Jong Un Sunday as a "prophecy fulfilled" in the country that he described as the "darkest, hardest" place in the world for Christians.

Sean Feucht, penned lyrics for his song "Finish What You Started (Song for North Korea)," which was released in 2012 as part of an album called 'Songs For Nations," in the exact spot on the Korean Demilitarized Zone where Trump and Kim embraced before their 50-minute meeting -- their third -- in pursuit of peace. The song calls for peace and hope.

Through his non-profit, Light A Candle Project, the Bethel Music singer/songwriter goes into some of the most heavily persecuted areas for Christians worldwide and has seen incredible things happen. But he told Fox News he "never imagined that the song would come true."

"Oh my God you can do anything, Oh my God Nothing is too hard for you," Feucht wrote these words from the North Korean side of the DMZ eight years ago.

He shared an image on Instagram with his 97,000 followers of his blue guitar case in the exact spot where Trump and Kim walked Sunday, the first time a sitting president walked into the Hermit Kingdom.

"Oftentimes we have no idea how God can use our simple songs and prayers to change history," he added. "Long ways to go still but celebrating small steps (or giant leaps) today!"

South Korea's President Moon Jae-in said "President Trump is the maker of peace in the Korean Peninsula" in announcing the Trump-Kim meeting.

"I never expected to meet you at this place," Kim, who appeared overjoyed in the moment, told Trump through an interpreter.

"I was proud to step over the line," Trump told Kim later, inside the Freedom House on the South Korea side, according to the Associated Press. "It is a great day for the world."

Christians around the world have been praying for peace on the Korean Peninsula, especially for believers in South Korea, one of whom told Feucht she is still singing his song regularly in prayer meetings for North Korea.

North Korean defectors describe situations of life back home, where they quietly sing Christian hymns every Sunday while someone is on alert for informers. Another cowered under a blanket or in the toilet to pray, and another detailed a fellow prison inmate who'd been severely beaten for refusing to renounce her Christian faith.

And while this is a sign of hope to many, Open Doors USA told Fox News in February that Christian persecution was "worsening" in the nation where God is virtually outlawed and Kim is treated as a deity.

Feucht believes what his song says about God: "You're faithful to the end. You will finish what you started."