People take part in the 27th edition of March for Jesus, in Sao Paulo, Brazil, on June 20, 2019. "March For Jesus" is the largest evangelical event in Brazil. (Photo by Fabio Vieira/FotoRua/NurPhoto via Getty Images)

Millions marched in the streets of Sao Paulo, Brazil last week as part of one of the largest Christian gatherings in the world.

The March for Jesus in Brazil organizers report there were three million attendees with more than 10 hours of praise and worship, led by 28 Brazillian gospel bands and singers, and dozens of evangelical pastors and leaders, Evangelical Focus reported.

The president of the March for Jesus in Brazil, Estevam Hernandes, gave the opening prayer for the event that saw its largest turnout since it began in 1993.

“We cry out for Brazil, for the families, for the end of corruption, for the afflicted hearts, our country belongs to Jesus Christ," Hernandes said. "To Him all honor, glory, power, and majesty. As it says in Psalms 33: Happy is the nation whose God is the Lord.”

AT PASSION 2019, STUDENTS RAISE $400G TO TRANSLATE BIBLE FOR DEAF PEOPLE ACROSS WORLD

And for the first time, Brazil's president, Jair Bolsonaro, who has been called the "Trump of the Tropics," participated in the march, something he did last year as a candidate and promised to return after winning the election. 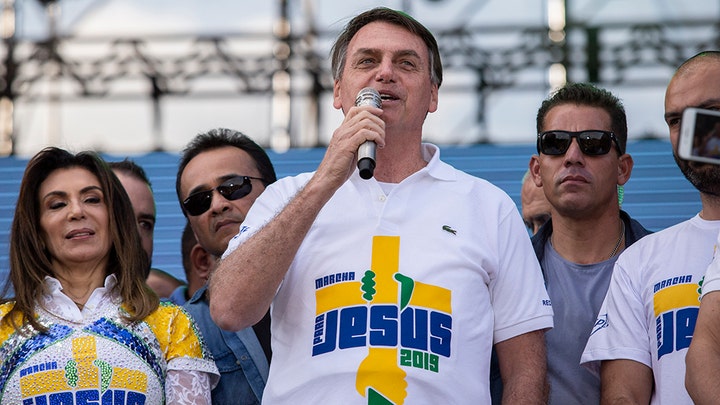 “You were decisive in helping change the destiny of Brazil," Bolsonaro told the millions who attended during a seven-minute speech. "It is very good to be among friends. And even better when they are friends with God in their hearts."

Bolsonaro pointed out that his country is "secular but its current leader is Christian," adding he hopes to overcome the "ethical and moral" problems in Brazil with the help of his Christian brothers and sisters.

The Brazilian leader, much like Trump, has not shied away from controversy and has been largely supported by evangelicals, a population that has spiked in Brazil, around 30 percent of the population of about 190 million people.

Although Bolsonaro is Catholic himself, his wife and children identify as evangelical.