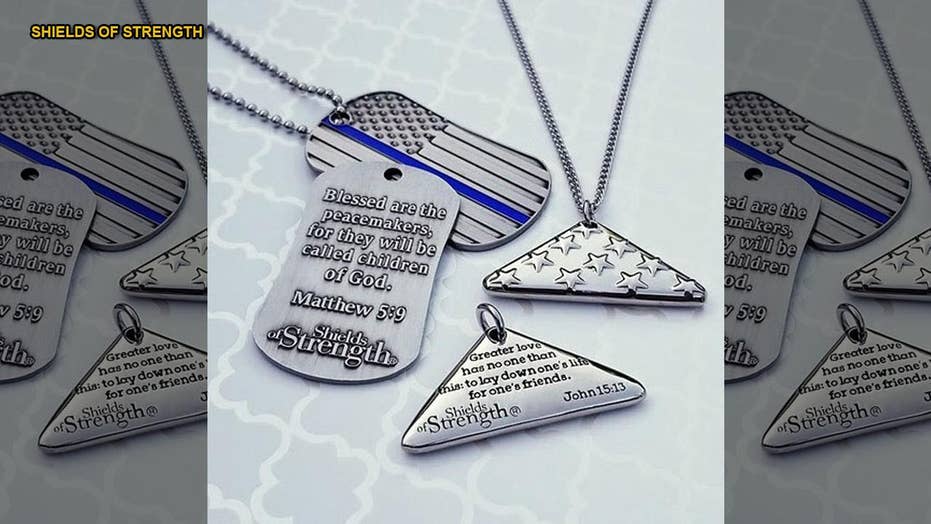 What started as a pet project by a world-class water-skier, has evolved into 'Shields of Strength,' an organization that is looks to arm military members, their families and now even law enforcement with faith-based patriotic support. 'Shields of Strength' has distributed more than 4 million dog tags with Bible verses on them to military and law enforcement members or their loved ones.

American troops stationed around the world are wearing their uniform, many with "Shields of Strength," a dog tag with a Bible verse on it, because of an unlikely partnership between a soldier and a world-class water-ski jumper.

The two are arming military and law enforcement members with faith-based patriotic support.

Today, more than four million dog tags with Bible verses on them have been handed out to military and law enforcement members or their loved ones.

MEDAL OF HONOR RECIPIENT: TRUMP ALLOWING TEAM TO BE PART OF CEREMONY 'MEANT SO MUCH'

One example is an army dog tag with the Bible verse Joshua 1:9, "I will be strong and courageous. I will not be afraid, I will not be discouraged for the Lord my God with me wherever I go."

And it all started as a pet project by Kenny Vaughn, a world-class waterskier, who started putting scripture on his skis after an accident. He then put Bible verses on dog tags and started selling them at Christian bookstores. The military quickly got his attention and now they even have a special one for law enforcement, the Thin Blue Line Shields, with over 400 items and designs available.

After 27 years in the military including four deployments and a post at the Pentagon, U.S. (Ret.) Col. David Dodd founded Point 27, a nonprofit in partnership with Shields of Strength, whose mission is to "point people to Christ" and give the faith-based dog tags to members of the military.

For Dodd, it's personal. When he was deployed he said knowing his kids had them was comforting to know they had a source to lean on when they were worried about him, and he and the soldiers in his command. One of the first battalions sent to Afghanistan following 9/11 had them.

CAMPING WORLD CEO: 'I'D RATHER GO TO JAIL' THAN YIELD TO CITY IN AMERICAN FLAG CONTROVERSY

During his military service, Dodd distributed more than 10,000 Shields of Strength to members of the military, national and international leaders. Dodd was also encouraged by the scripture on his dog tags as he set up and orchestrated all the communications between all branches of the military and the soldiers stranded on a mountain top in Afghanistan as the military worked to rescue the soldiers from the Taliban during the Battle of Takur Ghar, deemed by the military as one of Operation Anaconda’s deadliest engagements.

In 2016, members of law enforcement requested a Thin Blue Line Shield of Strength inscribed with Matthew 5:9, which says "Blessed are the peacemakers, for they will be called children of God."

Point 27 has awarded more than 300,000 Shields of Strength to members of the military and law enforcement officers and families of fallen soldiers and fallen law enforcement officers. To broaden distribution, Point 27 works with military commanders and chaplains and national associations Concerns of Police Survivors (COPS), Tragedy Assistance Program for Survivors (TAPS) and the Gary Sinise Foundation.