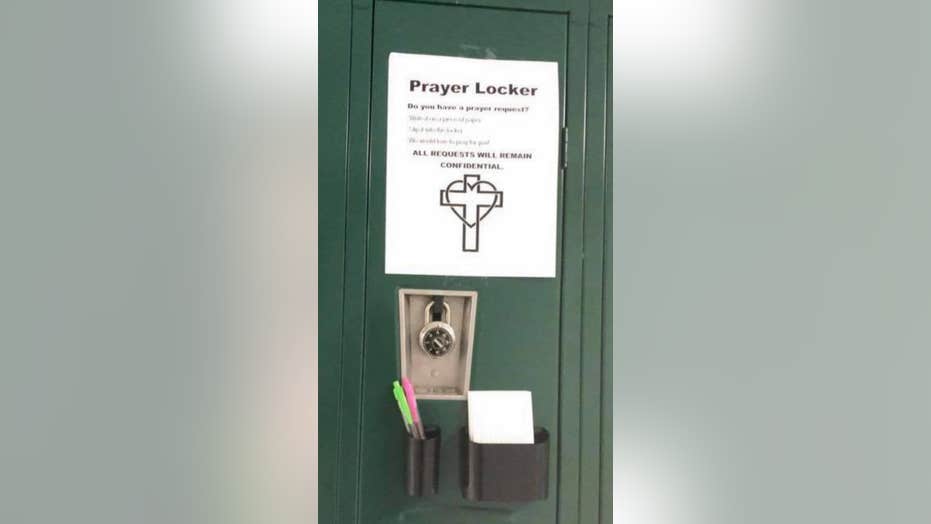 A Kentucky high school is shutting down a tradition allowing students to submit anonymous prayer requests so someone can pray for them.

While the prayer locker has student support, the group says it's a "clear violation of the separation of church and state," alleging it was put up by school officials - but it was done by a student.

Emily Chaney, a sophomore at East Ridge High School, will no longer be able to carry on the "prayer locker" tradition she started so students could submit anonymous prayer requests after the Americans United for the Separation of Church and State complained. (Courtesy of Emily Chaney)

Emily Chaney, a sophomore at East Ridge High School who organized the unique prayer locker, plans to collect them personally, as she and her church will continue to pray over each one because she says it is part of her religious freedom.

Because of AUSCS, the prayer will no longer be anonymous.

Pike County Schools Superintendent Reed Adkins sent a letter to the schools, writing "Erecting a “Prayer Locker” is a clear violation of the separation of church and state," WYMT reported.

But Hiram Sasser, general counsel for First Liberty Institute, a religious liberty law firm, told Fox News the school is in trouble for kowtowing to the D.C. organization.

“It appears this would be a violation of the Free Exercise Clause of the First Amendment and blatant viewpoint discrimination to ban students from a clear opportunity to share their faith," Sasser said. "Indeed, it appears that this violates the Department of Education guidelines on prayer in public schools."

"I mean, we weren't forcing anybody to put a prayer in that locker," sophomore Zack Mason, who intends to help Emily, told the local news. "I just don't see how anybody could see anything wrong with this. It's just a wonderful person, doing something wonderful. And it's just somebody taking a blessing away."