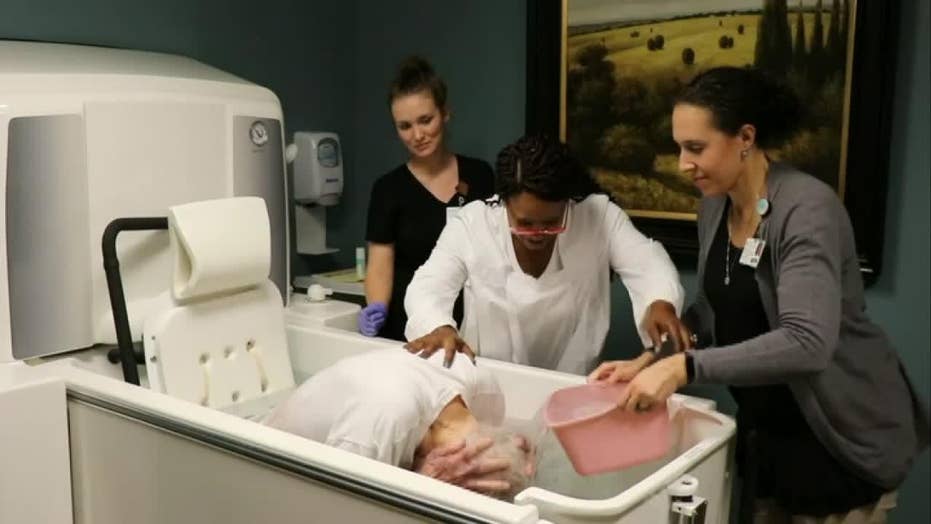 The dying wish of a Navy veteran to be baptized came true this week thanks to the help of an assisted living facility in South Carolina.

Octogenarian Jenis James Grindstaff is an at-home hospice patient at Spartanburg Regional who has been battling cancer for some time. His family said his request to be baptized came to a surprise - however, it was one they wanted to make sure happened.

"He's always read the Bible, but he had never been baptized," Grindstaff's son Jim said. "He wanted to show he believes more than anything else."

On Dec. 11, using the hospice special needs fund, Spartanburg Regional was able to transport Grindstaff to the assisted living facility where Chaplain Terrell Jones was waiting.

However, Grindstaff couldn't be lowered into a traditional baptismal pool because of his medical issues. Spartansburg brought in a special 60-gallon tub designed to assist with patients who can't get in and out of traditional baths.

A video of the baptism has since gone viral with more than 200,000 views.

Dressed in a white t-shirt, the video shows Grindstaff dunked, as water is poured over his head. Grindstaff's family members -- who are behind the camera -- clap and cheer at the end of the baptism.

"The rest of his family, his brothers and sisters, have been baptized, and for some reason or another, he just never got around to getting it done," his son Craig told WDSU.

After the ceremony, the hospice staff took extra time with Grindstaff, washing his hair and oiling his skin.

"Seeing that smile of his face fills my heart with joy," Tameka Irvin, the hospice home nurse, said.

Grindstaff said he had spent time serving in Cuba and Guantanamo. He also worked for 25 years as an air traffic controller.  He lives with his son Craig and daughter-in-law Pam.

"If I reach one person, it's a great deal," said Grindstaff.