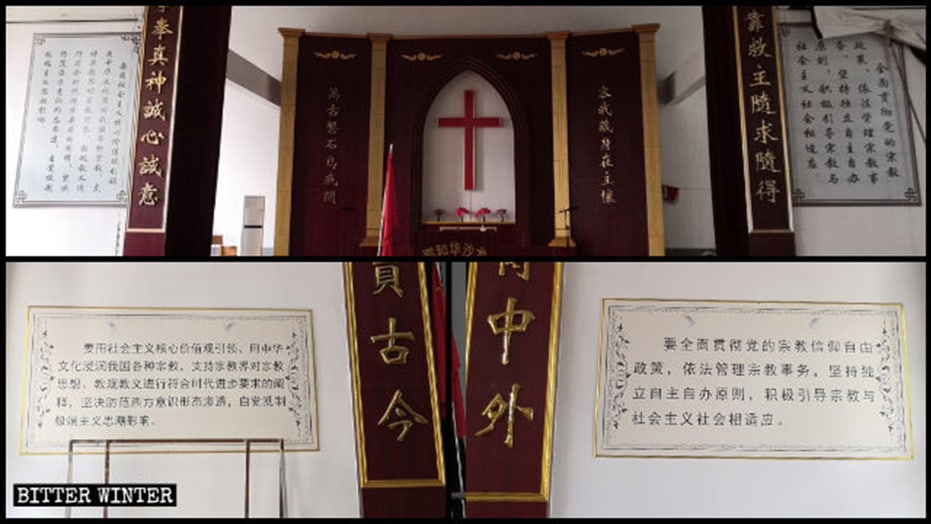 China's ruling Communist Party is reportedly censoring the pillars of Christianity and closing down churches that don't comply.

Reports claim the government has demanded the Ten Commandments be replaced with quotes by President Xi Jinping, and that portraits of the president, former leader Mao Zedong and other communist propaganda be used as well as part of "sinicization" to ensure citizens are loyal to the officially atheistic party or face the wrath of the regime.

“The Party must be obeyed in every respect. You have to do whatever the Party tells you to do. If you contradict, your church will be shut down immediately,” United Front Work Department officials reportedly told a congregation at the end of June.

The Chinese characters for the Ten Commandments have been removed and put into a bag. (Bitter Winter)

The state-sanctioned Three-Self Church - one of the largest Protestant bodies in the world - has removed the Ten Commandments from almost all their locations, but some have been reportedly shut down for not implementing the government's plan.

CHINA CRACKS DOWN ON SUNDAY SCHOOL IN CHURCHES: 'NO CHILDREN ALLOWED'

A congregant told Bitter Winter, a magazine on religious liberty and human rights in China, that the government is threatening to blacklist anyone not complying, meaning their travels will be restricted and schooling and future employment for their children will be impeded.

Political propaganda slogans and posters are posted throughout a Three-Self church. (Bitter Winter)

“The Communist Party’s ultimate goal is to ‘become God.’ This is what the devil has always done," a pastor from a state-run Protestant church said, adding that the government has a four-step process for methodically destroying Three-Self churches by eroding doctrine.

“The government’s first step is to prohibit religious couplets," he said. "Then it dismantles crosses and starts to implement the ‘four requirements’ by ordering the national flag and ‘core socialist values’ to be placed in churches. Surveillance cameras to monitor believers and religious activities are then installed. The last step is to replace the Ten Commandments with Xi Jinping’s speeches."

Recently, the government has also begun to enforce a law that the church cannot proselytize anybody under the age of 18, and the enforcement has looked like Chinese officials telling churches they can't have Sunday School.