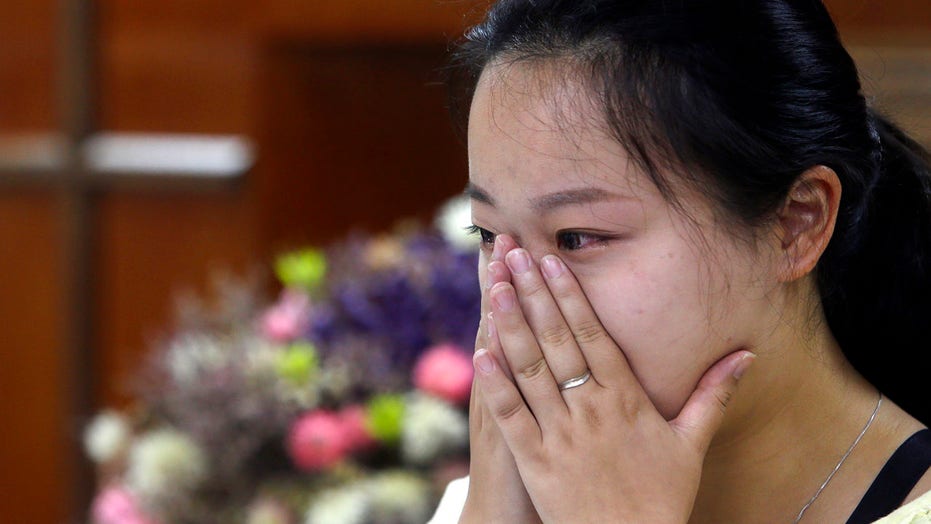 As China continues its crackdown on religion, Christians in the Communist country are fleeing for their lives.

China’s ruling Communist Party has carried out a widespread crackdown on all religious institutions in recent years, including bulldozing churches and mosques, barring Tibetan children from Buddhist religious studies and incarcerating more than a million members of Islamic ethnic minorities in what are termed “re-education centers.” President Xi Jinping , who is also party leader, has ordered that all religions must “Sinicize” to ensure they are loyal to the officially atheistic party or face the wrath of the Communist regime.

Liao Qiang, who fled from Early Rain Covenant Church after it was raided and targeted by the government for its opposition to Xi and the party, is now in Taipei, Taiwan, hoping to get asylum in the United States until China reverses the anti-religious surveillance.

In this Sunday, July 7, 2019, photo, from right; Ren Dejun, Liao Qiang, Peng Ran and Ren Ruiting follow a hymn book during service at a church in Taipei, Taiwan. The Sunday service this week at an unassuming church in Taiwan was especially moving for one man, Liao Qiang. It was the first time he had worshipped publicly since authorities shut down his church in China seven months ago. (AP Photo/Chiang Ying-ying)

More than 100 members of Early Rain were taken into custody from the church or their homes on Dec. 9 and 10, according to Human Rights Watch. Those detained included Wang Yi, the pastor, who made a point of holding a prayer service on June 4 each year to commemorate the 1989 bloody crackdown on democracy protesters in Beijing's Tiananmen Square, which China's government has tried to erase from history. Since then, they have been under constant Orwellian watch under the state.

Ren Ruiting, Liao's 23-year-old daughter, told the Associated Press she had to report her whereabouts to police using social media whenever she left her home and was informed that her safety would not be guaranteed.

“That’s when I knew it was no longer safe for us here, and that my children were most in danger,” Liao said after Sunday’s service, attended by about 30 people, at the small Reformed Presbyterian Xinan Church in Taipei.

ABOUT 80 PERCENT OF WORLD LIVES IN AREAS WHERE RELIGIOUS FREEDOM IS ‘HIGHLY RESTRICTED,’ REPORT SAYS

China’s government requires that Protestants worship only in churches recognized and regulated by the officially sanctioned Three-Self Patriotic Movement, although many more are part of independent congregations.

Liao refused to sign a statement renouncing his church after police tried to force him to do so.

“If our elders decided to break up the church, then I can accept it,” he said. “But it’s not up to you to say it’s evil or illegal.”

The persecution of Christians in China is nothing new. A report by the watchdog group Freedom House found that Christians and other religious groups in China have been persecuted since 2012, Fox News reported.

A third of all religious believers in China who belong to a faith group were also found to face “high” to “very high” levels of persecution, which ranges from bureaucratic harassment and economic exploitation to harsh prison terms and even violence.

But experts and activists say the Chinese government is now waging the most severe suppression of Christianity in the country since religious freedoms were granted by the Chinese constitution in 1982.