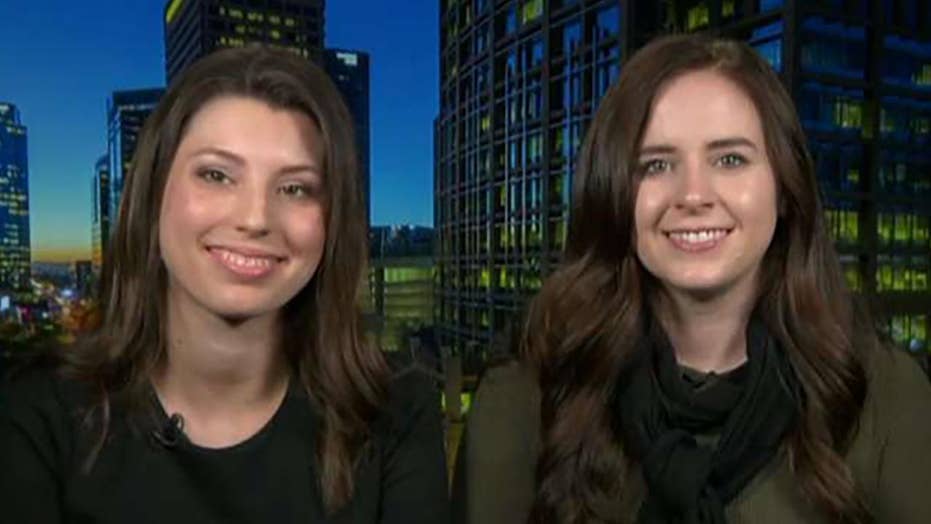 The co-owners of Brush &amp; Nib Studio react to their win for religious freedom on 'Fox &amp; Friends.'

A pair of Christian artists are celebrating a religious freedom win at the Arizona Supreme Court, which found the government cannot force them to make invitations for a same-sex wedding.

Joanna Duka and Breanna Koski, the owners of Brush & Nib Studio, appeared on "Fox & Friends" Wednesday and said they were "extremely excited" at the 4-3 decision that reversed a lower-court ruling in favor of Phoenix's anti-discrimination ordinance.

"We are super excited," Koski, a painter, said about the Monday ruling. "Ever since Joanna and I were little girls we had a dream of being artists and starting a business, and we are just so overjoyed that the city recognized our rights as artists. This was super important to us to stand for artists everywhere across the country."

She added: "We do serve everybody and love everybody but it's just certain messages that we cannot promote in our business because of our faith."

Her business partner, Duka, a calligrapher, said the heart of the case, which was ruled narrowly to customized artist creations, comes down to the question: "Can the government force artists by threat of jail time to create art that promotes messages inconsistent with their values?"

PITTSBURGH STEELERS' BEN ROETHLISBERGER ON SEASON-ENDING INJURY: 'I CAN ONLY TRUST GOD'S PLAN'

"For Breanna and I that includes certain messages about marriage that violate our faith, that includes messages that promote racism or incite violence, exploit women, or demean any member of any community, including the LGBT community," Duka added. "So that's why we're extremely excited the Arizona Supreme Court has ruled in favor of artistic freedom and the right of artists, not the government, to decide what messages we can and can't promote."

But the dissenting opinion in the case called it "deeply troubling," saying the case did not concern the content of the studio's products but was about the identity of the customer.

Kristen Waggoner, Alliance Defending Freedom (ADF) senior vice president of the U.S. legal division, who represented the pair, said "the very clear message of the court...is that free speech and free exercise rights aren't limited to soft whisperings that go on in the privacy of our homes, but that all Americans have the right to be able to speak and create art that's consistent with who they are. So that right extends to all Americans, not just those who share Breanna and Joanna's beliefs."

For example, Waggoner points out, a Democratic speechwriter should not be forced to write for a Republican and an LGBT filmmaker shouldn't have to make films that contradict their beliefs, either.

"So it's a broad win that extends to everybody," she added.

Last year, ADF and Waggoner also defended a Colorado baker who won his case at the U.S. Supreme Court after refusing to make a same-sex wedding cake. The high court found the state's civil rights commission showed anti-religious bias when it ruled against the baker.

The mayor of Phoenix says the ordinance is still in effect and lawyers for the city are examining potential grounds for appeal.