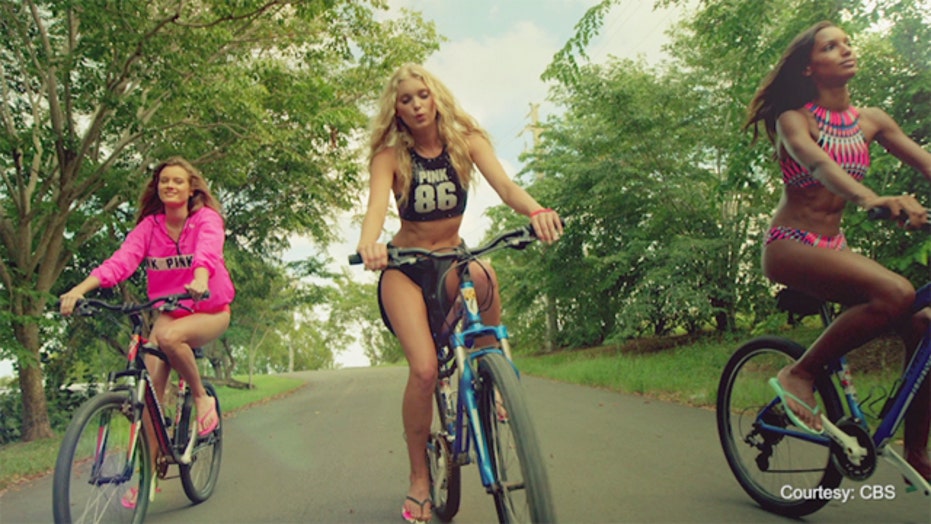 Supermodel Elsa Hosk gives us a behind-the-scenes look at the filming of Victoria's Secret's Swim Special in Puerto Rico.

While some new lingerie brands have been targeting their marketing campaigns to appeal to the average size woman, some industry insiders are wondering if Victoria’s Secret (VS) seems to be taking the opposite tack, using skinnier models than they have in the past.

Current Angel Elsa Hosk came under fire on Instagram this week after posting a picture of herself topless that some followers criticized because of Hosk's seriously slim frame. Commenters wrote a slew messages for the supermodel like, "Girl you gotta eat something you're skinny as hell," "Homegirl needs a burger," and "way too skinny."

Hosk, who started working for VS in 2015, isn't the only model who seems to be a departure from the lingerie seller's previous claims of featuring curvy gals (at least in relation to typical size 0 fashion models.) Svelte models Jasmine Tookes and Georgia Fowler started working with the fashion retailer in 2015 and 2016. In the past, the brand used to feature more curvaceous models like Tyra Banks, Stephanie Seymour and Laetitia Casta.

IRELAND BALDWIN STRIPS DOWN TO LINGERIE

"The models do look thinner, but then again, they've always been thin,” brand expert Scott Pinsker told Fox News. “What's interesting is that these Victoria's Secret models are marketing to other women, so it's less a commentary on what men find attractive, and more about the idealized notion of beauty in the eyes of American women."

“Everything about their marketing from the design of their stores, to the lavish runway shows, to the Michael Bay directed commercials, to the jewel encrusted fantasy bras showcases an over the top, heightened sense of the reality,” Casey said. “Their price point and extensive locations appeal to the average woman, but nothing about their marketing has ever presumed to have any relation to an average woman.”

Chris Applebaum, a director known in part for his sexy Carl’s Jr. commercials starring voluptuous models like Charlotte McKinney and Kate Upton, agreed, telling Fox News: “Most people know there’s a difference between Victoria’s Secret Angel supermodels and the rest of the population.”

These days the lingerie field is more crowded than ever, and trying lots of new approaches. In 2014, Aerie announced it would stop airbrushing their models and began to feature women like plus size model Iskra Lawrence dubbing this as the #AerieReal campaign.  They stuck to their new business model and saw a 20 percent increase in sales in 2016.

Another brand, Lonely, also started a social media campaign #LonelyGirlsProject where women of all shapes and sizes could post pictures of themselves wearing the lingerie. The brand gained attention when actresses Lena Dunham and Jemima Kirke posed in the lingerie for an unretouched photoshoot in 2016.

Rob Shuter, pop culture expert and editor in chief of NaughtyGossip.com, said even though there is a push for brands to showcase all body types, VS will do what it takes to keep raking in the cash. And they know what they’re doing. The company made $1.8 billion in 2016, according to Digital Commerce 360.

“VS is a profit business,” said Shuter. “They will use whoever they think will sell more underwear.”

Applebaum credited Victoria’s Secret’s continued success for their brand loyalty, regardless of which models they use.

“I applaud the promotion of all body types. I think it’s important for brands to remain true to their core consumer, core principals, and company values,” Applebaum explained. “Once you deviate from that you confuse consumers, lose consumers, and muddy the message of your brand.”

Victoria's Secret did not reply with a comment for this article.