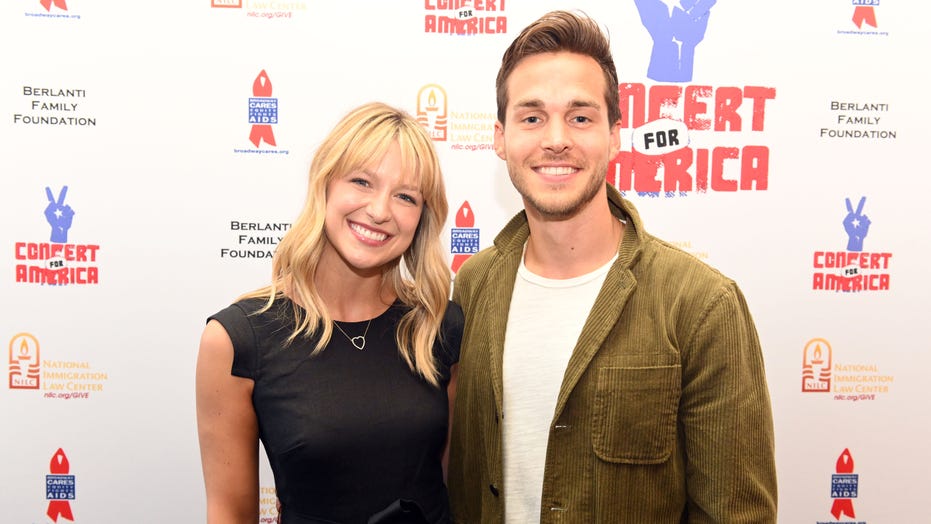 The star-studded group, which also included Yuri Sardarov, Gina Torres, Grant Gustin, and Caroline Rhea, were all on hand Saturday night for a host of musical and comedic performances and speeches at Seth Rudetsky and James Wesley’s Concert for America at UCLA’s Royce Hall, with all proceeds benefiting the National Immigration Law Center.

“It’s such an important cause and it’s something that deserves attention,” Wood told reporters. “Anytime we as artists can lend whatever abilities we do have, or at least interests we have to do something that’s impactful, I think it’s necessary and something we should do.”

Although Wood revealed that he and Benoist didn’t know what song they were singing together ahead of the concert, they went on to fittingly (and flawlessly) sing Irving Berlin’s “Old Fashioned Wedding” as if they had practiced together for months and the Supergirl star also kicked off the show with a solo performance of Carole King’s “Beautiful”.

Before the event began, their good friend Gustin, who performed “Running Home to You” from his TV show “The Flash”, told reporters the couple’s wedding was “amazing” and that he saw the duo’s coupledom first spark during a special episode of their shows. “When we were shooting our musical episode, we all realized that they liked each other,” he said.

As Rudetsky and Wesley kicked off their third Concert for America, they revealed that “Flash” producer Greg Berlanti and his husband Robbie Rogers funded and underwrote the entire event so that every dollar raised could go directly to the National Immigration Law Center.

“I think everyone has an immigration story,” Berlanti told the crowd as he and Rogers took the stage. “Both my grandparents immigrated from Italy at the turn of the century. [They told us] that the obligation was for us to create opportunities for other people to come as well. So, we’re grateful for everyone that’s here.”

As the concert continued on, more stars told their immigration stories, like Torres — the daughter of Cuban immigrants — and Saradov who immigrated with his family from Baku, Azerbaijan when he was only three years old.

“[My parents] immigrated believing and trusting in the promise of this country,” Torres said. “They raised three children to believe in the trust of the promise in this great country of ours. I am not only a proud daughter of immigrants but I am a proud friend, cousin and daughter of American citizens who vote, who are educations, aviators, small business owners and more, making their way and giving their way as best they can and inspire the next generation.”

Saradov revealed the harrowing story of his family’s experience immigrating to America, detailing what the horrors they experienced before they left home. “When James and Seth asked me to be here I knew I had to come,” he said. “I look at all of you and don’t lose hope because we will not stand for this.”

The National Immigration Law Center is the only national non-profit organization whose mission is to defend and advance the rights and opportunities of low-income immigrants, and for the first time, it was the only non profit the concert benefited.