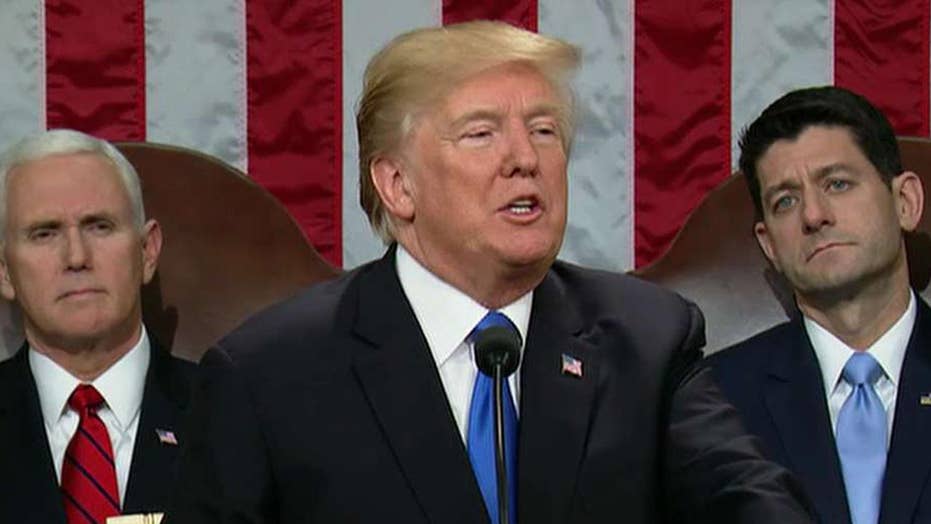 Trump delivers his first State of the Union address

It should come as no surprise that Hollywood was not happy with President Trump's first State of the Union address.

Many self-proclaimed activists from Hollywood took to social media to offer their critique of Trump's speech. While some stars did watch Trump's address, others said they refused to tune in but still offered their criticism.

I already know the state of the union-ain't good. Was pretty damn good about a year and a half ago.

Can't even watch this vile, deceitful fraud and his bizarre cult of self-interested sycophants. #SOTU #Click

I tried. I listened but the amount of BS and stunts and questions raised that will never be answered made me throw my remote and now I am listening to Tom Petty and am a better American for it. #SOTU

Tonight at 9 PM EST, I will be watching “All the President’s Men.”

I'm not watching some frothing orange gorilla read off a teleprompter. I've got better things to do, like alphabetize my spice cabinet. #StateOfTheDream

I will always support you #Brave one. I wrap my arms of love around you with healing compassion. Please #WatchRoseNotTrump today and make visible the once ignored. Sunshine is the best antiseptic 💖 https://t.co/SZvc4tb8hM

I was told darkness could not exist in the light. But here it is, for everyone to not see.#SOTU

Many of Trump's vocal Hollywood critics participated in a "People's State of the Union" counter-event in New York City on Monday.

Outspoken Trump critic and actor Mark Ruffalo hosted the program which focused on the anti-Trump "Resistance" movement, immigration issues and attacking the "ugly underbelly" of Americans who voted for Trump.

Mark Ruffalo shows his T-shirt reading "We are all dreamers" during the "People's State of the Union" event at The Town Hall in New York, Monday, Jan. 29, 2018. (AP)

The three-hour event was sponsored by various left-wing organizations including Planned Parenthood and MoveOn.org and organizers of the Women's March.