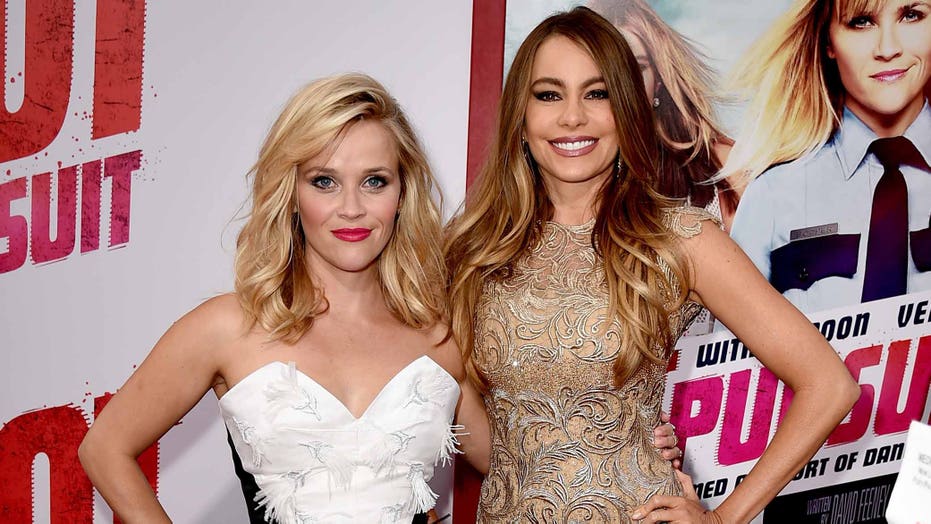 Sofia Vergara and Reese Witherspoon talk about costarring in

The pair even shared an onscreen kiss.

“It wasn’t a really insane make out,” Vergara told Fox News Latino. “It was just a fun, crazy [our characters] were pretending to be lesbians.”

In their new odd-couple buddy comedy, out in theaters on May 8, Witherspoon plays a straight-laced cop, and Vergara the feisty widow of a drug boss.

"We had long days, and we are in every scene, but it was super entertaining, and there wasn't a bad day on the set,” Vergara said.

In the movie, Vergara’s character, Daniella Riva, uses her sexuality to try to outsmart the crooked cops who are chasing her, while being protected by petite – and clumsy – Officer Cooper, played by Witherspoon.

The movie not only further showcases the actresses' well-defined comedic presence, it also allows the two powerful Hollywood stars to take control behind the scenes as well, with Vergara as executive producer and Witherspoon a producer on the project.

“The [movie] studios are so happy when you just bring them the materials, and you say, ‘We’re ready to do it. I have Sofia Vergara, and I’m ready to do it,’” said Witherspoon.

It is the first time Vergara executive produced a Hollywood film.  Previously she served as executive producer of the Spanish-language version of "Desperate Housewives," which aired in Latin American-countries, and "Killer Women," a short-lived TV series that aired on ABC in 2014.

“When Reese brought me the opportunity to be in a movie with her and to also be part of the producing team, of course, it was the perfect opportunity for me,” said the Colombian actress.

Vergara's U.S. career is chiefly in comedies, thanks to her role as Gloria Pritchett on "Modern Family.” Witherspoon won the Best Actress Oscar for her portrayal of June Carter Cash in "Walk the Line," but comedic chops were firmly established with her breakout role in "Election" and in the "Legally Blonde" movies.

Being producers on the film allowed the two stars to push ahead a project with two female leads in a genre traditionally dominated by males.

“When you create your own characters and you come up with the material yourself, you have the freedom to do whatever you want," Witherspoon said.

This is the third film to be released under her company Pacific Standard production company, the first being "Gone Girl," which was followed by "Wild." Both of those movies were critically acclaimed and went on to receive Oscar nominations.

“About three years ago, I looked around and realized there weren’t a lot of films developed for strong female leads," Witherspoon told FNL. "That doesn’t mean they have to be perfect characters. I just wanted to see the complex women I see every day in my life reflected in the movies. So I started buying books and developing books, and that's how my company started.”

If "Hot Pursuit" is a success at the box office, it will help Vergara  further position herself  as a Hollywood powerhouse, one of her aims when she established Latin World Entertainment in 1998 with her business partner, Luis Balaguer. A multi-service company that includes a Hispanic management division, a producing arm and a marketing team that takes brands and products into the Hispanic market.

"I’ve been doing a lot of different things beside acting," Vergara said. "[Acting] has been the vehicle for me to do all the other things."