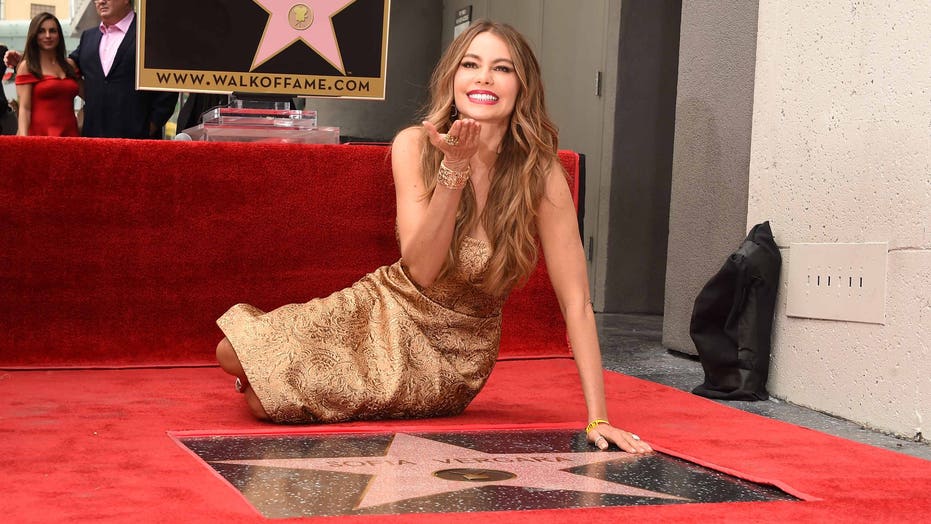 Sofia Vergara gets star on Hollywood Walk of Fame

Colombian actress Sofia Vergara is honored on The Hollywood Walk Of Fame.

Sofia Vergara got very emotional as she heard friends and co-workers give their praise for her work ethic, comedic timing and all-around awesomeness as she unveiled her very own star on the Hollywood Walk of Fame.

The “Modern Family” actress, who was joined by several members of her family from Colombia, including her son Manolo, received the coveted distinction Hollywood during a ceremony on Thursday in Los Angeles.

“I have to calm myself because my English is not going to be very good this time,” an emotional Vergara quipped to the crowd. “It is unbelievable for me to be standing here today with all of you. I don’t have anything to say but thank you.”

The 42-year-old beauty went on to thank her friends and family for their unwavering support throughout the years, as well as the creators of ABC's “Modern Family.”

“If they had never invented Gloria Pritchett, I wouldn’t be here,” she said. “I owe everything that I have been able to do in the American market to this amazing character.”

She said she was happy to be able to share the moment with her family, who flew in from Miami — “if you don’t have anyone to share it with, what do you do with a star in Hollywood if you can’t go and brag with them that you got it?”

The one person that Vergara seemed to forget to thank was her hunky fiancé Joe Manganiello, but the actress quickly recognized her error and jumped back to the stage.

“Wait, I forgot to thank my handsome fiancée for always making me be on time … I almost missed my start today – Thank you. I love you,” she told him.

Steve Levitan, creator of “Modern Family,” Vergara’s co-star Eric Stonestreet and her son Manolo all spoke during the ceremony.

Fun fact about the star’s location is that it sits just one star away from the star of her on-screen husband Ed O’Neill – in between the two stars sits one for his other famous on-screen wife Kaety Sagal.

“I hope (my fans) see me as an example that working hard and respecting yourself and respecting others really pays off. Don’t stop dreaming,” Vergara said.