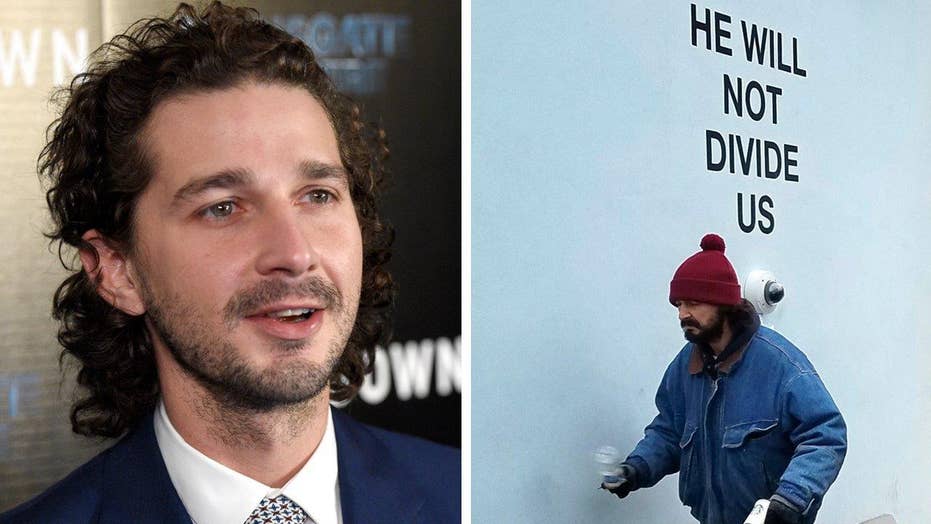 NEW YORK – Actor Shia LaBeouf was arrested in New York City early Thursday after he got into an altercation with another man during a performance art project that has seen him chanting "He will not divide us" in front of a live camera since Donald Trump's first day as president.

Police said LaBeouf pulled the scarf of a 25-year-old man outside the Museum of the Moving Image in Queens, scratching his face in the process. They said he also pushed the man, who refused medical attention.

The tussle happened on the seventh day of a livestream that LaBeouf and two collaborators intend to have running 24 hours a day for the next four years.

They have invited the public to repeat the phrase "He will not divide us," into a camera mounted on an outdoor wall.

It was unclear whether the camera captured any of Thursday's confrontation, but it did show the aftermath, including LaBeouf being handcuffed and led off by police.

In the moments before his arrest, he issued a plea into the camera.

"Hey, be nice. Everybody be nice down here, man. Just be nice! That's the only requirement. Be nice!" he said. "That's all I ask. Be nice. Pro this, pro that. Cool. But be nice."

The camera went live the morning of the inauguration. LeBeouf has been a frequent presence. Most of the time he is surrounded by enthusiastic supporters, but the cameras have also shown him getting aggressive with fellow participants.

In one instance, he shoved a man who said "Hitler did nothing wrong."

In another, he bumped chests with a man who began reciting a white supremacist slogan.

Videos posted on social media show LaBeouf returning to the site before sunrise to resume chanting.

He faces a misdemeanor assault charge and is due in court April 4.