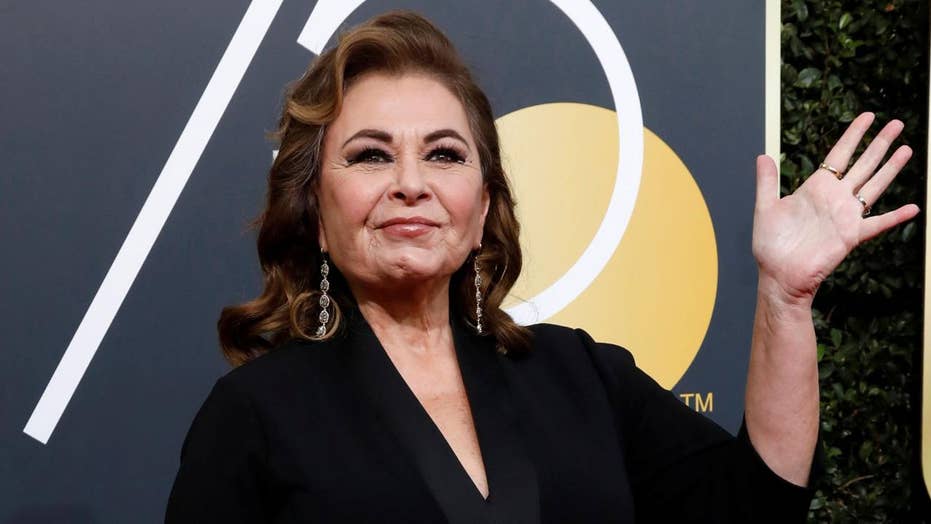 Disney chairman and CEO Bob Iger says network's decision to cancel the reboot of the popular sitcom was 'right thing' to do; reaction from Fox News media analyst Howard Kurtz.

“Roseanne” has been canceled in a shocking move by ABC that comes on the heels of the comedian making a racist remark about former President Obama's aide Valerie Jarrett. The show had sky-high ratings but the network gave it the boot after Roseanne Barr’s tweet drew a lot of backlash.

Barr isn’t a stranger to making headlines with her antics. Here are just some of her most controversial moments of all time:

Posing as Adolf Hitler for Heeb magazine in 2009

In a photo shoot where Roseanne claimed she “Couldn’t wait to breed with non-Jewish people,” she sparked outrage when she dressed as Adolf Hitler and posed while eating and baking burnt “Jew cookies.” The bizarre moment stirred up accusations that she was a racist, although the publisher defended her, stating: “Heeb is a satirical Jewish culture magazine that interrogates stereotypes and ideas (hopefully in creative ways) that many hold sacred in order to represent the complex and nuanced perspectives that many Jews have about their identities.”

Claiming to be an incest survivor to People in 1991

While standing in front of a large audience at Montview Boulevard Presbyterian Church in Denver, Barr made a very shocking revelation by telling the group of 1,000 people, “My name is Roseanne, and I am an incest survivor.” Roseanne claimed that she had been sexually abused during her childhood in Salt Lake City. She walked back the statements and told Oprah that she regretted her comments. “The drugs and the combination of drugs that I was given, which were some strong, strong drugs, I totally lost touch with reality in a big, big way.”

Roseanne posted a picture of her swollen and bloodied face on Twitter with the caption, “Got in a tussle w bill cosby. U shoyld (sic) see that mfer.” She quickly deleted the tweet and admitted that she, “Joked about tussling cosby,” and her apparent injuries were due to a, “chemical peel to look more sexier.”

Roseanne caught backlash in 1990 when she belted out a less-than-stellar rendition of the “Star-Spangled Banner” while grabbing her crotch in an attempt that was deemed one of Billboard’s “10 Worst National Anthem Performances Ever.” In her attempt at integrating humor into the performance, Barr received criticism from many who believed she was ridiculing the game of baseball.

The comedian tweeted the address and phone number of Trayvon Martin's shooter, George Zimmerman, and received an intense social media reaction from users claiming that doing so was an invasion of privacy. She defended herself saying, “But vigilante-ism is what killed Trayvon. I don’t support that.” Roseanne was later sued by the parents of Zimmerman in a suit that was eventually thrown out in July 2015.