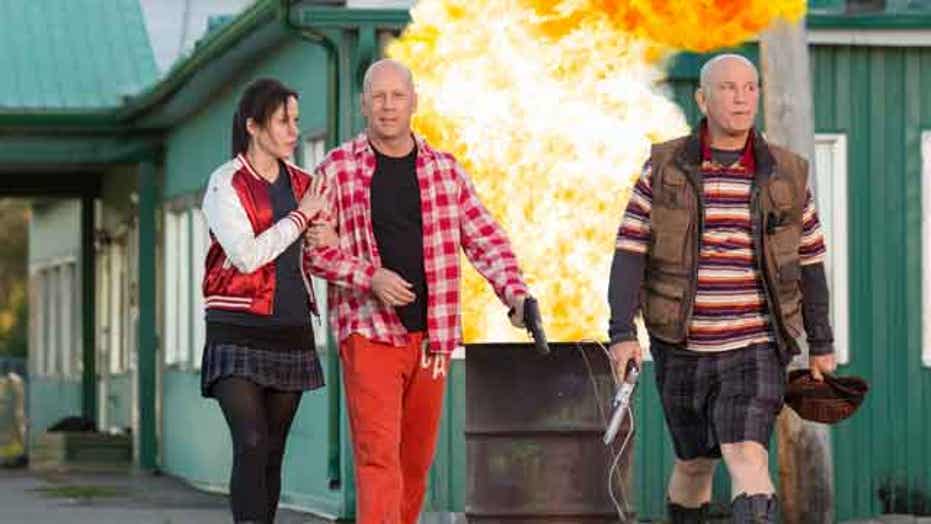 Ashley Dvorkin and Justin Craig on this week's movies, including the all-star action comedy 'Red 2', 'Turbo', 'The Conjuring' and 'Girl Most Likely'

Now that the joke of aging and retired assassins is behind us, having been successfully played out in “Red”, “Red 2” is able to move beyond its initial concept and allow this mighty talented cast to really flex their comedic muscles in a sequel that just slightly surpasses the original.

When Marvin (John Malkovich) tracks down Frank (Bruce Willis) and his new spouse Sarah (Mary-Louise Parker) to alert them they are CIA targets and need to find the location of a long-lost nuclear weapon, the retirees go on the run. Former Black Ops team member Victoria (Helen Mirren) is tasked with targeting and killing Frank and friends, but even she has to beat newcomer and ace assassin Han (Byung-hun Lee) to the kill.

As Frank, Sarah and Marvin traipse across Europe chasing the MacGuffin, they encounter a ragtag team of new and returning characters, including Brian Cox reprising his role as Ivan and newcomer Catherine Zeta-Jones as a seductive Russian operative. Parker’s cattiness compared to Zeta-Jones’ smooth-talking tigress is an enjoyable contrast that heats up some scenes.

Anthony Hopkins is delightful as an insane professor who knows the whereabouts of the lost nuclear device which the CIA is racing Russia to uncover. His zany antics combined with his erudite and genteel British scholarliness gives the thespian a satisfying range to work with. Hopkins makes the role look like a cakewalk for him, which it probably was.

Once again, John Malkovich steals the show. In “Red,” Malkovich created Marvin, a perfect concoction of paranoia, mad scientist and dorky juvenile prankster. With “Red 2,” Malkovich boosts Marvin’s charisma and drollness without sacrificing quality. A character as quirky as Marvin could become stale rather quickly, but Malkovich keeps his craft fresh and vibrant. Everything from his occasional puppy-dog pouts to his hilarious costumes, like his stereotypical senior citizen jump suits, to his crazy conspiracy theories make Marvin one of Malkovich’s best roles yet. Honestly, there should be a spinoff film just about Marvin and give Malkovich his very own franchise. It’s a win-win for the universe.

Not all the comedy lands. Some of the gags are on the verge of mediocrity; a gentle push in either direction of absurdity would make all the difference. Just when the film starts to feel like it could potentially hit a wall, along comes Anthony Hopkins to breathe comical new life into the second half.

Though “Red 2” has some uproarious moments, it is still a high-octane actioner with some fantastic “Bourne”-like sequences, which director Dean Parisot (“Galaxy Quest”) skillfully maneuvers between the comedy. Essentially this is a “Bourne” film laced less with intrigue and more with comedy. Some of the fight sequences, especially between Bruce Willis and Byung-hun Lee, are top notch.

The film is at its best when the entire ensemble is together, which surprisingly is a decent portion. While teaming Mirren and Willis was a head-turner in “Red,” teaming Willis and Hopkins here is equally exciting. They all appear to be enjoying their time shooting (and shooting) their away across Europe which is reflected in the final product, making “Red 2” an enjoyable ride.

The “Red” series is based on comics by Warren Ellis and Cully Hamner and screenwriters   John and Erich Hoeber have nicely adapted Eliis and Hamner’s world into a Hollywood one, but really it’s the perfect casting that has made the "Red" franchise such a sleeper hit.

Behind the scenes, director of photography Enrique Chediak and editor Don Zimmerman give “Red 2” a Bourne-like sophistication and intensity while composer Alan Silvestri keeps the film moving at breakneck speed with his groovy score.

While “Red 2” is a fairly traditional espionage film with a comedic twist and brilliant cast, the film is ultimately as Hopkins’ character frequently quips: “Jolly good.”