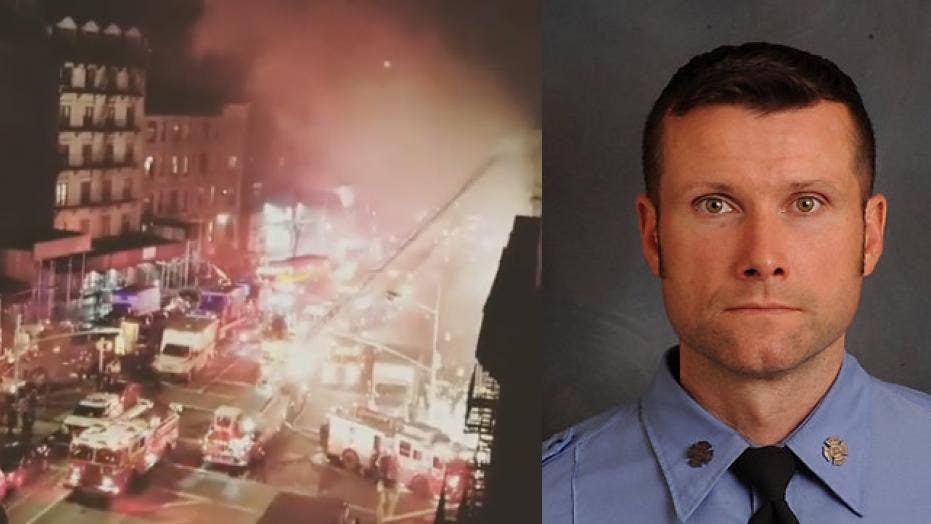 While on set, actor Ed Norton noticed a fire inside a Harlem building and notified police. Quickly more than 175 firefighters responded to the five-alarm fire. One fireman, Michael Davidson, was killed while battling the blaze.

From cameramen to "professional daredevils," movie and television crew members willingly put themselves in danger every day to create action-packed scenes — but sometimes, stunts go wrong and accidents happen.

Car wrecks, falls, fiery explosions and helicoptor crashes are just some of the ways people have lost their lives producing Hollywood magic.

Here's a list of on-set movie and television tragedies that have rocked the entertainment industry in recent years.

New York City firefighter Michael Davidson, 37, was killed on March 22, 2018, while battling a blaze that broke out in the basement of a Harlem building on the set of upcoming film, "Motherless Brooklyn," which stars Edward Norton and Bruce Willis.

The 15-year veteran, who had reportedly been cited for bravery four times, was "separated from the rest of the unit" while attempting to escape the advancing fire.

"The search ensued. Members tried desperately to find firefighter Davidson, and when they did he was unconscious," Fire Commissioner Daniel Nigro said.

A motorcycle scene turned deadly on the set of action flick "Deadpool 2" on Aug. 14, 2017, after professional road racer Joi “SJ” Harris went airborne and crashed through glass in a Vancouver studio.

Harris was portraying Zazie Beetz, who plays Domino in “Deadpool 2,” at the time of the incident. It was her first movie and she was not wearing a helmet, Deadline reported.

On July 12, 2017, a stuntman suffered fatal injuries during a 22-foot fall in Senoia, Georgia, where "The Walking Dead" was being filmed.

John Bernecker attempted to grab a railing as he started to lose his footing, but he lost his grip and fell headfirst onto the concrete ground.

Assistant director Matthew Goodwin told a responding officer that Bernecker was supposed to fall from a balcony over a railing onto "a pad made of a layer of 22-inch boxes, port-a-pit pads, and a large pad," according to a report from the Coweta County Sheriff's Office. He landed a few inches from the pad, Goodwin said.

Two pilots were killed and another was injured after their twin-engine plane went down in the Colombian mountains on the set of Tom Cruise‘s "American Made" in 2015.

Alan Purwin and Carlos Berl were pronounced dead at the scene, while co-worker Jimmy Lee Garland was left paralyzed from the waist down, according to People Magazine.

A stuntman was fatally injured while filming "The Expendables 2" ‒ starring Sylvester Stallone, Bruce Willis and Arnold Schwarzenegger ‒ in October 2011, during a man-made explosion inside a rubber boat in Bulgaria, local newspaper The Sofia Echo reported.

"It is with great regret that we confirm this unfortunate accident," production company Nu Image/Millennium Films said in a statement back then. "Our hearts go out to the families and those on the production affected by this tragedy."

Cameraman Greg Jacobsen, 33, was killed during an aerial video shoot on the set of the TV show "Campus PD" on April 30, 2011.

There were four passengers aboard the helicopter, including the pilot, when it crashed near the Indiana University of Pennsylvania campus.

"We are deeply saddened by this news. Our heartfelt condolences are with Greg’s family and friends and the Cineflix staff who worked with him," Simon Lloyd, CEO of programming for Cineflix Productions, told Realscreen magazine.

“Our thoughts and deepest condolences are with the Huber family at this time," Paramount said in a statement to Hollywood Reporter at the time.

The man was reportedly operating a high-powered scissor lift when the machine toppled over and crushed him, according to TMZ.