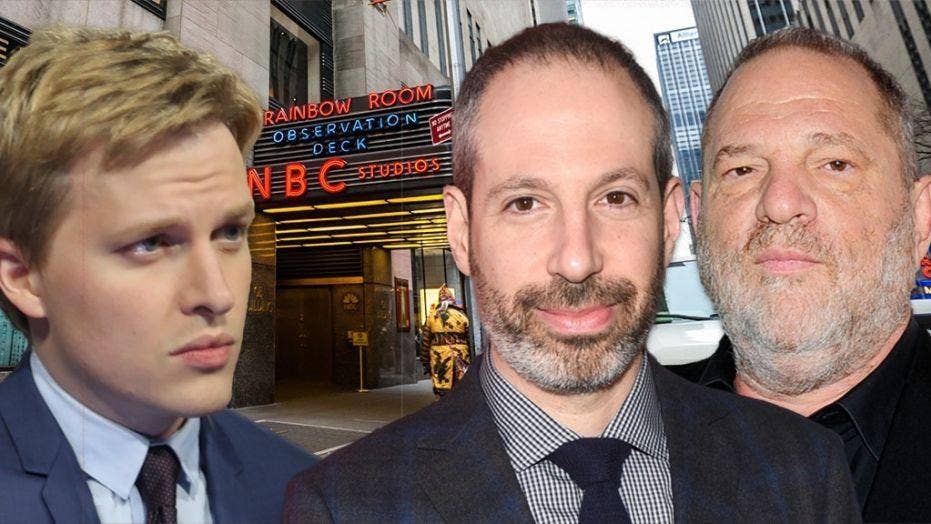 Rich McHugh, a former NBC News producer told the Daily Beast that NBC News let Ronan Farrow's investigative piece on Weinstein slip away because NBC News President Noah Oppenheim didn’t want to upset a Hollywood powerhouse like Weinstein when he had ambitions of returning to the movie industry.

NBC News let a Pulitzer Prize-winning story slip away because honchos at the Peacock network didn't want it to see the light of day, a former NBC News producer told the Daily Beast.

In the website's bombshell report Thursday, NBC News producer Rich McHugh, who was working with Ronan Farrow on the reporter's investigation of alleged sexual misconduct by Hollywood producer Harvey Weinstein, claimed that an order to stop pursuing the scathing story came from "the very highest levels at NBC."

McHugh, who left the network's investigative unit earlier this month, told Fox News the order came as he and Farrow were preparing to travel to Los Angeles to interview a woman "with a credible allegation of rape" against the now-disgraced movie producer.

"I was told not to do the interview and ordered to stand down, thus effectively killing the story," McHugh said. "That was unethical, and a massive breach of journalistic integrity.

"Is there anyone in the journalistic community who actually believes NBC didn’t breach its journalistic duty to continue reporting this story?" McHugh added. "Something else must have been going on."

The network told Fox News in a statement Thursday, "The assertion that NBC News tried to kill the Weinstein story while Ronan Farrow was at NBC News, or even more ludicrously after he left NBC News, is an outright lie."

But according to The Daily Beast, it was NBC News president Noah Oppenheim who made the decision to nix Farrow's piece. The exec reportedly didn’t want to upset a Hollywood powerhouse such as Weinstein when he had ambitions of returning to the movie industry.

Farrow and McHugh reportedly pitched the story investigating Hollywood's notorious "casting couch" practices in January 2017. The story originally was meant to air around that year's Oscars, which wouldn't have been good for the Hollywood-friendly Oppenheim, the screenwriter of several films including "Jackie," "The Maze Runner," and the first installment of the "Divergent" series.

Insiders told Fox News at the time that NBC executives may have been wary of ruining relationships in Hollywood, and brittle from years of bad publicity and tabloid covers about its own stars’ behavior and personal lives.

NBC denies these issues had anything to do with their decision to kill the Weinstein story. But the network has been scrambling to give a credible explanation for why they sat on an explosive audiotape of a powerful man behaving badly.

It's not just Oppenheim who has connections to the disgraced accused rapist. Back in 2013, Weinstein attended an Obama event at the Martha’s Vineyard home of Comcast CEO Brian Roberts. The Weinstein Company has had TV programs on NBC Universal stations, and Weinstein reportedly begged NBC Universal executive Ron Meyer for support when the harassment allegations began to surface.

Additionally, Oppenheim’s boss, powerful NBC News Chairman Andy Lack, has allowed his subordinate to take heat for quashing the Weinstein story. Oppenheim’s role at NBC is far smaller than that of his counterparts at other networks since so much of NBC’s news operation reports directly to Lack. “He doesn’t do much other than spiking stories,” said an NBC News insider of Oppenheim.

Andrew Lack is NBC's President and Chief Operating Officer. He has come under fire for his reported role in squashing Ronan Farrow's Harvey Weinstein expose.

Farrow ultimately won a Pulitzer Prize for his reports on sexual misconduct by Weinstein and other powerful men, which ultimately saw the light of day as a series of articles in The New Yorker. Ironically, Farrow would not have won journalism's most coveted prize had NBC run his expose, as broadcast networks are not eligible for the Pulitzer.