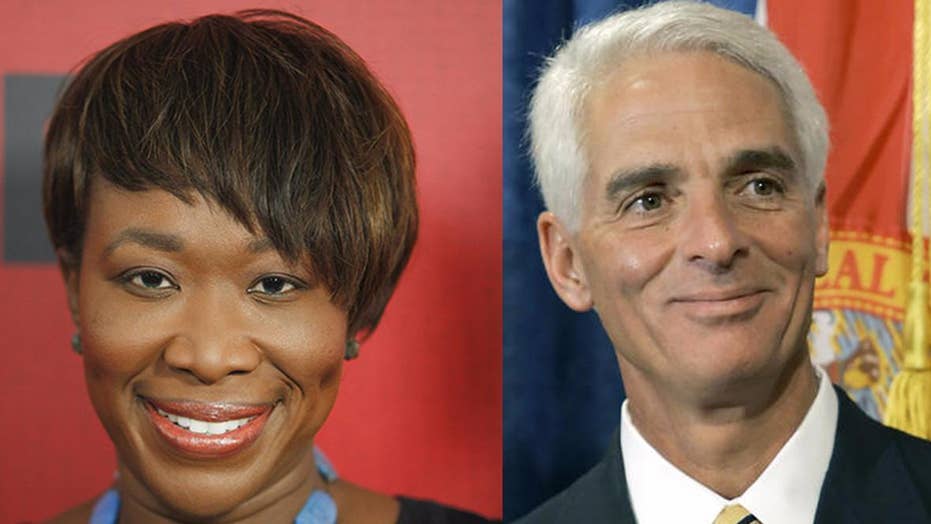 MSNBC host Joy Reid issues an apology for old blog posts in which she speculated about the sexuality of former Florida governor Charlie Crist.

MSNBC star Joy Reid claims that homophobic comments on her old blog, “The Reid Report,” were not written by her -- despite the fact that she has already apologized for much of the rhetoric.

Reid apologized last December when the old blog posts — unearthed by a Twitter user and reported by Mediaite -- came to light. Less than five months later, Reid is changing her tune and told Mediaite that the homophobic content does “not represent the original entries” on her site, essentially claiming archives were hacked.

Reid allegedly published a dozen blog posts from 2007-2009 containing remarks that are highly offensive to the LGBTQ community. MSNBC prides itself on being progressive, and Reid’s alleged decade-old comments directly contradict the network’s typical direction.

The old blog targeted former Florida Gov. Charlie Crist, who Reid mocked as “Miss Charlie,” for being gay and closeted, even though there is no proof to back her claims. The posts fanned rumors of Crist’s sexual orientation and his political opponents tried to tar him with the gossip during his governorship — when he was a Republican.

Mediaite reported that it received links to Reid’s old blog through the Wayback Machine, an Internet archiving service. Reid apologized at the time, admitting she wrote the homophobic slurs.

“This note is my apology to all who are disappointed by the content of blogs I wrote a decade ago, for which my choice of words and tone have legitimately been criticized,” the MSNBC star wrote on Dec. 3. “I regret the way I addressed the complex issue of the closet and speculation on a person’s sexual orientation with a mocking tone and sarcasm. It was insensitive, tone deaf and dumb. There is no excusing it.”

Additional anti-gay blog posts from the now-defunct blog were discovered last week and the Wayback Machine has reportedly, mysteriously removed access to Reid’s old archives – but an Internet sleuth preserved screen shots. Reid’s latest statement to Mediaite backtracks on the original apology and claims that archives of her site had been tampered with.

MSNBC host Joy Reid claims she did not write homophobic remarks displayed on the archives of her old blog. (2015 Ron Adar)

“In December I learned that an unknown, external party accessed and manipulated material from my now-defunct blog, The Reid Report, to include offensive and hateful references that are fabricated and run counter to my personal beliefs and ideology,” Reid told Mediaite. “The manipulated material seems to be part of an effort to taint my character with false information by distorting a blog that ended a decade ago.”

Reid also claims that she is working with a cybersecurity expert, notified federal law enforcement officials and blames any pain dished out to the LGBTQ community on “whoever corrupted the site.”

“It’s unclear when the nefarious hackers would have hacked her site and added the controversial content, since it has been defunct for years and still is. More importantly, NBC could or would not specify exactly which posts Reid is claiming were doctored,” Mediaite’s Caleb Ecarma wrote.

The Wayback Machine did not respond to requests for comment.

When reached last year, MSNBC declined to comment regarding whether Reid was going to be disciplined for her site’s apparent homophobic remarks and anti-gay jokes shortly after they were unearthed. MSNBC did not immediately respond when asked on Monday if the network would investigate her new claims.

It’s easy to see why Reid would want to distance herself from the offensive post, as Rachel Maddow, MSNBC’s most-watched host and cash cow, is openly gay.

The old blog post belittled Crist as dreading physical relations with his wife on their honeymoon and even included a joke about Crist having sex with Sen. John McCain, R-Ariz. Reid commented in the blog that Crist got married to a woman in the first place to help him become McCain’s 2008 running mate. Mediaite counted 17 times Reid's blog derisively referred to Crist as “Miss Charlie,” and the subject led her to opine on why gay men stay in the closet.

“When a gay politician gets married, it usually indicates that he is highly ambitious, and desires to put himself in a position to move up the power ladder,” The Reid Report stated.

The blog further mocked Crist with tags “gay politicians” and “not gay politicians.” The alleged posts were written at the time when Crist was a conservative Republican. Back in 2012, Crist joined the Democratic Party and endorsed Barack Obama for re-election.

The Reid Report reportedly even mocked the sexuality of her now-superstar colleague, Maddow.

Reid is now a liberal hero and prominent voice of the #Resistance movement, but it appears that she is either being dishonest about the archives being hacked or was disingenuous when originally admitting to the homophobic rhetoric.

MSNBC did not respond when asked why Reid apologized if she didn’t actually write the bog entries.