Taylor Swift's "End Game" may be to keep Marsha Blackburn from being elected to the Senate, but Tennessee voters appear to be shaking off the pop star's endorsement of her opponent.

On Sunday, Swift urged her 112 million Instagram followers to register to vote and cast their ballot for Blackburn's opponent, former governor Phil Bredesen. After her post, voter registration in Tennessee went up to 65,000 registrations in a 24-hour period. However, a new New York Times poll on Friday shows Blackburn is ahead of Bredesen by 14 points.

Taylor Swift, left, broke her silence on politics by speaking out against Marsha Blackburn. (AP)

Swift wrote to her followers, "As much as I have in the past and would like to continue voting for women in office, I cannot support Marsha Blackburn. Her voting record in Congress appalls and terrifies me."

Swift wrote she will be voting for Bredesen for the Senate, and also for Rep. Jim Cooper, a Democrat who's running for re-election.

Blackburn told Fox Business’ Connell McShane on Wednesday she believed her constituents would not be swayed by the celebrity.

“Tennesseans are more interested in the fact that Marsha Blackburn is endorsed by the U.S. Chamber of Commerce, by the Fraternal Order of Police, by the Police Benevolent Association and by the National Rifle Association, where I have an ‘A’ rating and their endorsement,” Blackburn said. 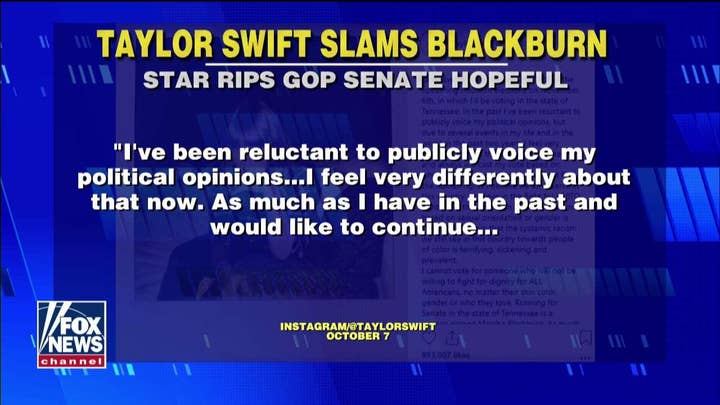