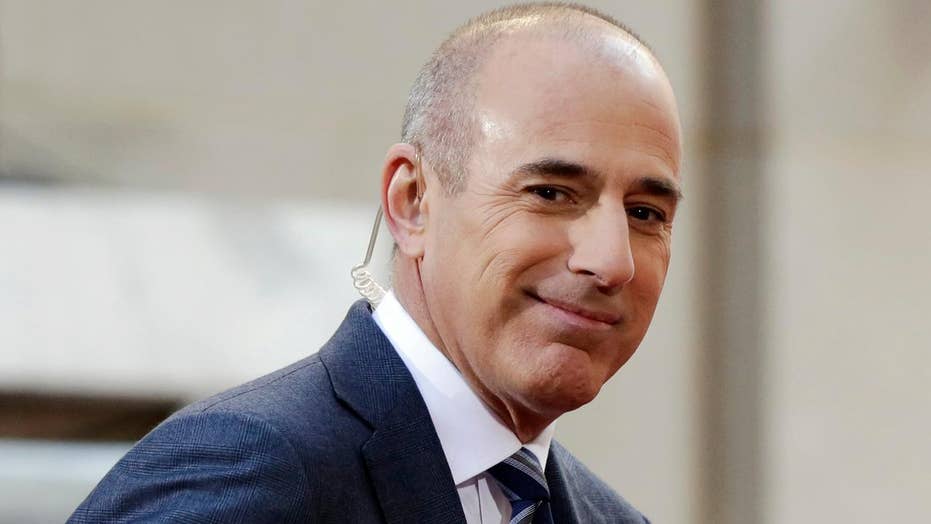 It was Nov. 23, 2017, the Macy’s Thankgiving Day Parade. Dressed in monochromatic black, a “gray and tired-looking” Matt Lauer was overheard telling a co-worker, “This is going to be my last parade.”

The noose was tightening around the neck of the “Today” show host. Just six days later, America’s “favorite dad” was unceremoniously ditched by NBC following a “detailed complaint from a colleague about inappropriate sexual behavior in the workplace.”

But while 60-year-old Lauer was resigned to his fate the day of the parade, insiders tell The Post that he fought to the bitter end. He lied about previous liaisons, repeatedly telling top bosses he had nothing to confess or feel ashamed about.

Then Lauer admitted only that he’d had three “consensual” affairs during his 25 years at “Today.”

Even now, he struggles to accept that his fall was so swift.

“He goes between sadness and acceptance of his fate, to disbelief how it all happened so quickly and how the situation was so out of his control,” says a source close to him.

It was in mid-November, around six weeks after the Harvey Weinstein scandal broke, that years of speculation about Lauer’s “indiscretions” were being seriously examined.

According to the NBC source who eavesdropped on Lauer’s ominous Thanksgiving parade prediction, “He was already being investigated by Variety magazine, but at that point, nobody knew what they had got on him.

“The Times was calling around, saying they were doing a piece on the culture of the ‘Today’ show, and The Enquirer was asking about settlements paid to female staff members who had affairs with Matt.” 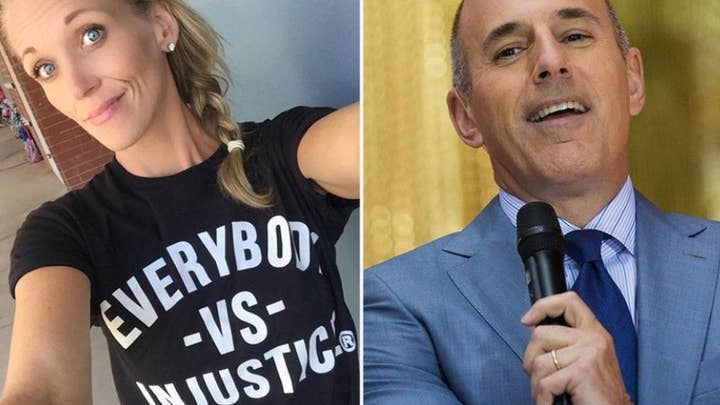 During that period, NBC President Noah Oppenheimer and Chairman Andy Lack, Lauer’s close friend, and others approached him “several times,” asking, “Is there anything we should know or be worried about?”

Lauer responded each time, “I am racking my brains, but I can’t think of anything.”

Gossip had dogged Lauer at 30 Rock that he was cheating on his wife of 19 years, former model Annette Roque.

In particular, the rumors focused on a suspected dalliance with “Today” contributor Giada De Laurentiis, with whom the anchor was spotted on a beach in Barbados in 2011. (Both Lauer and De Laurentiis denied an affair.)

But, according to the NBC source, “Genuinely, nobody at NBC News had any idea at this stage that he was preying on younger staffers at ‘Today.’

“Nobody knew what Matt was doing with the interns and junior producers. It was appalling.”

“Nobody knew what Matt was doing with the interns and junior producers. It was appalling.”

That all changed after Lauer’s first accuser, still employed at NBC, came forward the weekend after Thanksgiving. A meeting with her lawyers was hastily arranged with human resources for 6 p.m. on Monday, Nov. 27.

“She told them she had a sexual relationship with Matt during the Sochi Olympics in 2014, and it continued when they returned to New York,” says the insider.

“She was a very junior staff member at the time so there was a clear issue of balance of power.”

The source says the woman provided “irrefutable evidence” — speculated to be a naked photograph of Lauer. And the accuser also claimed “that she wasn’t the only woman he’d done this to.”

The complaint triggered a rapid chain of events, not least because the accuser was represented by renowned civil-rights and employment lawyer Ari Wilkenfeld.

“She had a high-powered attorney from Washington, DC, and so everyone knew if NBC didn’t take swift action, they would have arranged for a sit-down interview with a competitor,” a second source tells The Post.

Tellingly, in a Nov. 29 statement, Wilkenfeld noted, “Our impression at this point is that NBC acted quickly, as all companies should, when confronted with credible allegations of sexual misconduct in the workplace.” 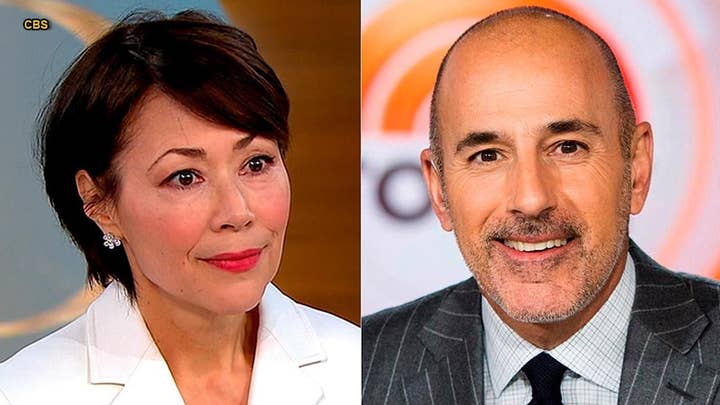 If Lauer had an inkling of the thunderbolt that was about to strike, he didn’t show it during his Tuesday, Nov. 28, appearance on “Today” — the morning of his firing.

“He was acting his usual cocky, confident self,” says the first insider. “He had no idea that this would turn out to be his last day on the show.”

“He was acting his usual cocky, confident self. He had no idea that this would turn out to be his last day on the show.”

Indeed, the anchor was in stitches on-screen, recalling the previous year’s holiday tree lighting at Rockefeller Center, which had been a washout. He even jocularly poked Savannah Guthrie in the arm to make his point as they perched on the sofa with co-hosts Al Roker, Hoda Kotb and Dylan Dreyer.

By that afternoon, however, Lauer, who earned $20 million per year, had lawyered up.

He and an associate of his personal lawyer, William Zabel, sat through a crunch-time meeting with HR executives and representatives from NBC’s legal department. The accusations were leveled about the Sochi episode and other matters.

“Matt was at first unapologetic, defending himself,” says the employee close to the situation. “He claimed he’d had three consensual affairs in the 25 years at ‘Today.’ ”

A third source tells The Post, “They were all much more than a quick f–k.”

However, as the evidence was put to him, his demeanor changed.

“He became quiet and didn’t argue,” adds the first insider. “He accepted that it didn’t look good.”

Both sources revealed that no decision was made about Lauer’s future at the meeting.

Instead, he was fired in person that night at his weekday Manhattan apartment in Lenox Hill, where swindler Bernie Madoff used to live. The messenger? Lauer’s one-time pal, Lack.

“It [the atmosphere] was very cold,” says the third source, who is an acquaintance of Lauer’s. But the NBC insider claims Lack was “furious” and called out his behavior as “reprehensible.”

“Matt, I was told, remained quiet,” the NBC insider added.

News of Lauer’s dismissal was relayed to Kotb and Guthrie at 4 a.m., as they were traveling to 30 Rock in their cars on their way to work on Wednesday, Nov. 29.

“They were shocked, there were tears, but they had time to work on their opening remarks [to the TV audience] about Matt,” says their colleague.

The shock announcement led at least two other women to immediately come forward to NBC with claims similar to those of the initial accuser. One complaint was from a former employee who said Lauer had sex with her in his locked office in 2001. She alleged she lost consciousness and woke up on the floor. “She said she didn’t report the encounter at the time because she felt ashamed and feared losing her job,” says the second insider.

NBC News declined to comment for this story. Representatives for Lauer did not respond to The Post’s requests for comment, but previously issued a statement in which he expressed his “sorrow and regret for the pain I have caused others by words and actions.” He added, “Some of what is being said about me is untrue or mischaracterized, but there is enough truth in these stories to make me feel embarrassed and ashamed.”

According to another NBC insider, Lauer was referring to the passed-out woman’s claims when he spoke about untruths.

“Matt didn’t deny that because he didn’t want to walk through all the allegations,” the insider said. “He just felt there was no point in saying anything, apart from what he said in his statement.”

'Off with his head!'

But a “Today” show staffer, who requested anonymity for fear of being fired, went even further in defending Lauer, blaming the climate of the #MeToo movement.

“What happened with Matt’s immediate firing was an unprecedented set of circumstance,” the staffer said. “Remember, NBC News spent over a month investigating Brian Williams’ ‘untruths,’ so why, with Lauer, did they have no other choice but to fire him immediately, with no hearing or investigation?

“NBC News didn’t investigate at all. After Matt’s 25 years with ‘Today,’ they simply screamed, ‘Off with his head!’ ”

Consequently, facing defeat, Lauer retreated to the $36.5 million Hamptons compound he shared with Roque and their three kids. That was until his wife kicked him out for good, as revealed by Page Six this week. Lauer has moved into a nearby place so he is on hand for their children, with him and Roque remaining “cold but cordial,” sources on Long Island say. The couple was seen arriving separately at their Bridgehampton horse farm earlier this week.

All this time unemployed has given Lauer a period to reflect. According to the third insider, the veteran newsman is especially sad that Lack has not spoken to him since the dramatic firing some two months ago.

“Matt is still feeling a lot of shame,” the insider said. “But he is angry because he certainly wasn’t the only person in TV doing this, but he has taken the fall.”

He recently told one friend, “The world is a dark place.”