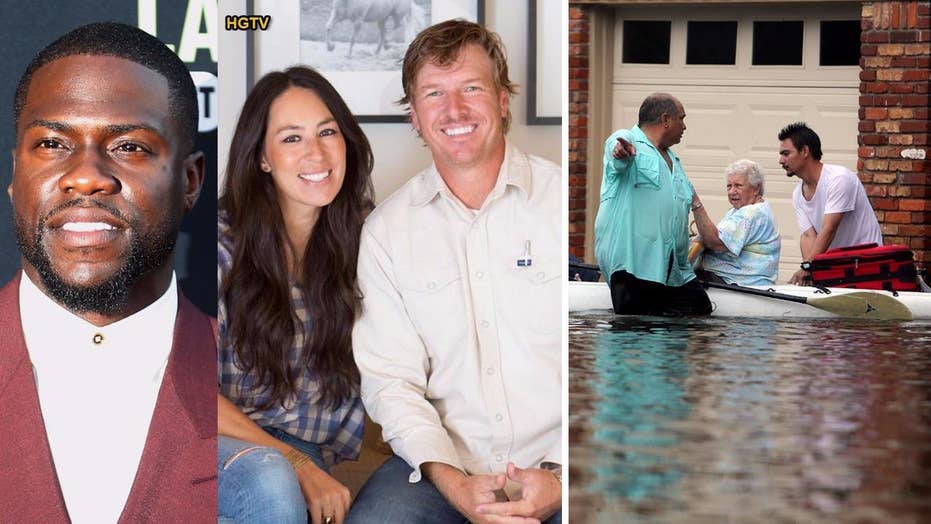 Fox411: Kevin Hart, JJ Watt and Chip and Joanna Gaines are some of the celebrities sending support to people in Houston and other parts of Texas affected by Hurricane Harvey through large charitable donations

Celebrities are sending their support to people in Houston and other parts of Texas affected by Hurricane Harvey.

The weekend storm brought "unprecedented" flooding to Houston after making landfall in Texas as a Category 4 hurricane on Friday. On Monday, Houston and nearby towns received more than 24 inches of rainfall, trapping residents in their homes and forcing some on their roofs as rescuers work around the clock to bring them to shelter.

HURRICANE HARVEY VICTIMS: HERE IS WHAT YOU CAN DO TO HELP

More stars opened up their wallets to help Texas after the storm, including the Kardashian family, who pledged $500,000, and country singer Chris Young, who pledged $100,000. Kevin Hart, who challenged other celebrities to donate, increased his contribution amount to $50,000. Chris Brown then gave $100,000. Beyonce, a Houston native, announced on Tuesday she will be working with her charity to assist those affected by the flooding in her hometown.

"My heart goes out to my hometown, Houston, and I remain in constant prayer for those affected," she said in a statement to the Houston Chronicle.

Texas native Miranda Lambert tweeted she was heartbroken by the news, meanwhile, other celebrities took to social media to express their thoughts and prayers to those affected by the storm.