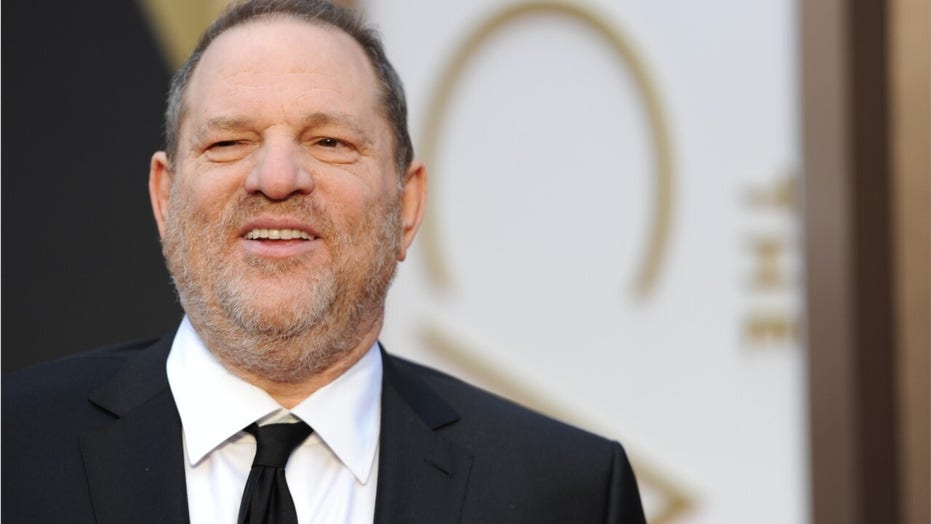 Former Hollywood film producer Harvey Weinstein has been found guilty of two out of five charges against him. The third-degree rape and criminal sex act charges could send him to prison for up to 25 years.

NEW YORK – Former Hollywood film producer Harvey Weinstein was found guilty by a Manhattan jury Monday of two of five charges relating to sexual assaults and faces as many as 25 years in prison.

He was found guilty of a criminal sex act for assaulting production assistant Mimi Haleyi at his apartment in 2006 and third-degree rape of a woman in 2013. The jury found him not guilty on the most serious charge, predatory sexual assault, which could have resulted in a life sentence. He was ordered to jail by the judge immediately after the conviction.

In this courtroom drawing, Harvey Weinstein, center, sits at the defense table surrounded by his attorneys as jurors file out of the courtroom after being told by the judge to go back and keep deliberating in Weinstein's rape case, Friday, Feb. 21, 2020, at Manhattan Supreme Court in New York. (Elizabeth Williams via AP)

The case marks the only criminal trial to stem from the many accusations that came out about Weinstein following a bombshell expose written by Ronan Farrow in 2017 in which 13 women accused the now-disgraced movie mogul of sexual assault.

Manhattan District Attorney Cy Vance told reporters after the verdict that eight women "changed the course of history in the fight against sexual violence.

"These are eight women who pulled our justice system into the 21st century by declaring that rape is rape and sexual assault is sexual assault no matter what. Rape is rape whether it’s committed by a stranger in a dark alley or by an intimate partner [or] in a working relationship."

Weinstein attorney Donna Rotunno vowed to file for an appeal "as soon as possible" as she told reporters her client is "tough and strong" despite his "difficult" medical condition.

As expected, Weinstein chose not to testify, avoiding the risk of having prosecutors grill him on cross-examination about the vile allegations. He confirmed the decision on Feb. 11 after returning to the courtroom from meeting with his lawyers behind closed doors for about a half-hour as speculation swirled that he was pushing to testify.

Asked as he left court if he was thinking of testifying, Weinstein said: “I wanted to.”

Defense lawyer Arthur Aidala added that Weinstein “was ready, willing, able and actually quite anxious to testify and clear his name” but didn't do so because his lawyers felt prosecutors ”failed miserably" to prove their case beyond a reasonable doubt.

Six women out of the many who have accused Harvey Weinstein of vile sexual behavior testified at the trial. Their harrowing accounts were the centerpiece of the prosecution case. Other accusers were allowed to testify because prosecutors allege there was a practiced method to Weinstein's attacks.

Lauren Marie Young, a model from suburban Philadelphia, testified that Weinstein invited her to his Beverly Hills hotel room, lured her to the bathroom, stripped off his clothes, pulled down her dress and groped her breast. Her allegation is part of a criminal case that was filed against Weinstein in California just as this trial was getting underway.

It took the jury five days to reach a verdict. (AP Photo/John Minchillo)

Her testimony bookended that of the first accuser to testify, actress Annabella Sciorra, who alleges Weinstein barged into her apartment in the mid-1990s, threw her on a bed and raped her as she tried to fight him off by kicking and punching him.

In between, jurors heard similar stories of Weinstein ingratiating himself with much younger women, appearing to show interest in helping their careers before getting them into a hotel room or an apartment and violating them.

Most were aspiring actresses. Sciorra was a star on the rise. Another, the 2006 accuser Mimi Haleyi, was looking at the time to get more involved in behind-the-scenes aspects of the entertainment business.

The defense case, meanwhile, mainly relied on the testimony of three witnesses that Weinstein’s lawyers used to try to cast doubt on the accounts on two of the accusers.

Talita Maia, a former roommate of the woman Weinstein is charged with raping, told the jury the woman never gave any indication that he victimized her — in fact, she said, the woman spoke highly of him and once called him her “spiritual soulmate.”

In this Oct. 24, 2017, file photo, Mimi Haleyi appears at a news conference in New York. Weinstein was found guilty of criminal sex act for assaulting the then-production assistant at his apartment in 2006. (AP)

“She seemed to really like him as a person," Maia said. "She would only compliment him.”

Another friend of the woman testified that she seemed like “her everyday self” when they met up for breakfast with Weinstein just a short time after she alleges he assaulted her.

Thomas Richards, a Hollywood talent agent, testified the woman was friendly toward Weinstein during the breakfast and didn’t say or do anything to indicate she’d just been raped.

The third witness, Mexican model and actress Claudia Salinas, repudiated the testimony of Young, one of the women called by the prosecution to bolster the allegations of Weinstein’s main accusers.

Asked about Young’s claims that she stood by and did nothing while Weinstein groped her at a Beverly Hills hotel in 2013, Salinas responded that it “never happened.”

Young had testified that Salinas closed the door behind her and Weinstein as they went into the bathroom, where she alleges he stripped off his clothes, grabbed her breast and masturbated. Once it was over, Young said she found Salinas standing outside the bathroom and shot her an evil look before leaving as quickly as she could.

“If I had done that, I would remember that,” Salinas testified. “I would never close the door on anybody.”

Weinstein was finally arrested and led away in handcuffs in May 2018, seven months after The New York Times and The New Yorker exposed his alleged misconduct in stories that would win the Pulitzer Prize.

Among other men taken down by the #MeToo movement since the scandal broke: news anchors Matt Lauer and Charlie Rose, actor Kevin Spacey and Sen. Al Franken.

Weinstein, the product of a working-class family from Queens, achieved success at two movie studios he created with his brother Bob: Miramax — named for their parents, Miriam and Max — and then the Weinstein Co.