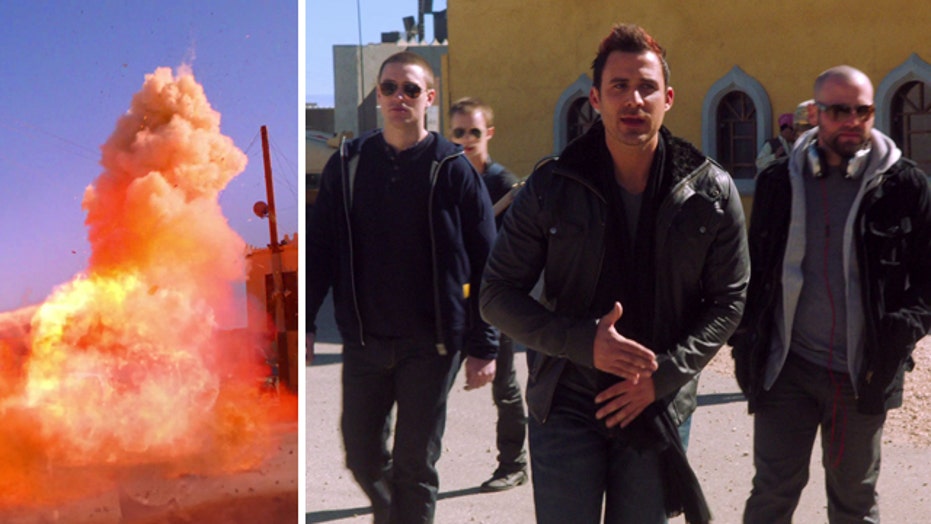 The Secret State may be relatively new on the professional music scene with their first full-length album slated for release this year, but they’re already making quite an impression.

“While we do have a society that supports the American military, we wanted to really raise awareness as to what it’s like being deployed and all the obstacles you face,” drummer and violinist Mike Marx-Gibbons, who enlisted in the Army the day after 9/11, told FOX411 Pop Tarts column. “And then what it’s like to come home, dealing with that physically, mentally and emotionally.”

The band was granted unprecedented access from the United States Army to shoot the emotionally-charged music video for their upcoming single “Fight or Flight” at the Army’s National Training Center in Fort Irwin, Calif. They also featured active duty soldiers in the video to better tell the tale of sacrifice and loss, offering viewers a glimpse into what American soldiers face overseas.

Nine of the 10 soldiers featured in the video have served in Iraq, Afghanistan or both, and they are all from the 11th Armored Cavalry, known as the “Blackhorse,” which provides an enemy force to fight the visiting units on a training rotation at Fort Irwin. The song and video also hits incredibly close to home for the burgeoning band, as three of the five Baltimore-based boys have served in the military.

“The there are so many military themed-videos out there that are fake, so having this opportunity was amazing,” said band member Danny Espinosa who served in the Coast Guard and later in Afghanistan as a defense contractor. “I don’t think it has ever been done before, and the U.S Army really allowed us to create something great, and at the same time let the soldiers experience filming and being part of a music video.”

Still, the band carefully selected which soldiers would be featured in the video. The final slot in the video was filled after several soldiers competed in an intense physical training showdown. Specialist Daniel Radebaugh won the position. Additional realistic combat scenes for “Fight or Flight” were shot at Strategic Operations in San Diego, Calif., and almost everyone in the production team had a military background.

However, “Flight or Fight” wasn’t written with the intention of sharing the stories of American soldiers – it’s something that happened organically in the creative process.

“It just came out that way,” Espinosa said. “It came together very naturally, and everybody came on-board.”

And so far, the reception for the video – which was directed and produced by two highly-respected women in the entertainment industry, Alison Savitch and Karen Kraft – has been overwhelmingly positive.

“We showed it at one military base with about 1,500 people and there was a standing ovation which was really great to see, and at corporate events [with leading government figures] it’s been really positive,” continued guitarist Josh Jones, who served in the Coast Guard and in Afghanistan. “And not just from our usual young demographic… people from all over love the movement and message.”

But paying tribute to the many men and women who have served in the military wasn’t enough for The Secret State. Fifty percent of the song’s download proceeds will be donated to organizations that assist the military. And despite the difficulties associated with breaking into the cutthroat music industry, the band insists it is nothing compared to the challenges of fighting on the front lines.

“The pressures here are a lot less to deal with than when you are in combat,” Jones added.