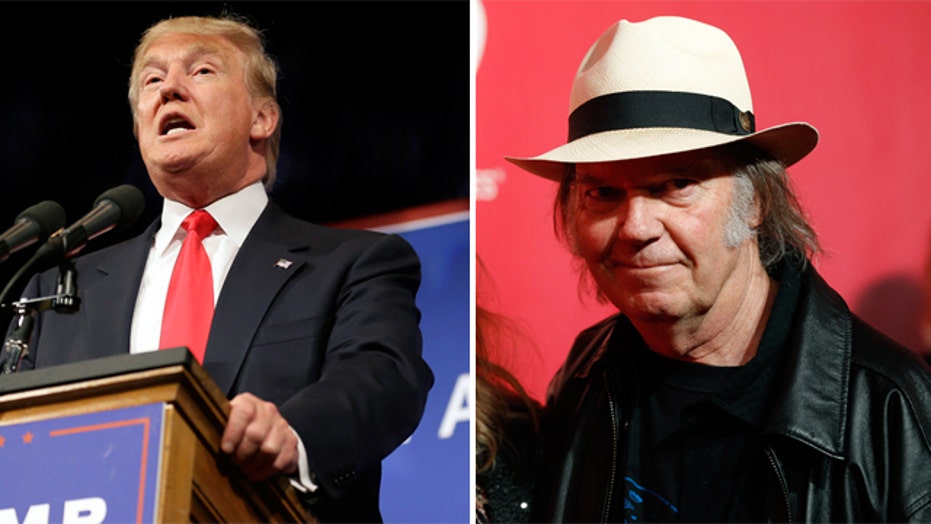 The New York real estate mogul arrived on stage at his campaign kickoff announcement Tuesday as the sounds of Young's "Rockin' In The Free World" blared through the atrium at Trump Tower in midtown Manhattan.

The only problem? Young blasted the Republican candidate following his announcement, with the rocker claiming Trump didn't have permission to use the music.

"Donald Trump was not authorized to use 'Rockin' In The Free World' in his presidential candidacy announcement," a statement from Young's team released late Tuesday read. "Neil Young, a Canadian citizen, is a supporter of Bernie Sanders for President of the United States of America."

However, when FOX411 reached Trump's campaign manager for comment, he sang a very different tune.

“Through a licensing agreement with ASCAP, Mr. Trump’s campaign paid for and obtained the legal right to use Neil Young’s recording of ‘Rockin' In The Free World,'" Trump's Campaign Manager Corey Lewandowski told us. "Nevertheless, there are plenty of other songs to choose from. Despite Neil’s differing political views, Mr. Trump likes him very much.”

It's not the first time -- or even the first time this year -- a candidate has been chastised by a musician for use of a tune. When Marco Rubio played the electronic hit "Something New" at a rally, the duo behind the song spoke out almost immediately, declaring Rubio hadn't obtained permission to use the song and they "don't want to be affiliated with a particular party during the upcoming presidential race."

Similarly, back in 2012, when Mitt Romney played Silversun Pickups' "Panic Switch," the band sent the Republican candidate a cease and desist letter and guitarist Brian Aubert declared, "We don't like people going behind our backs, using our music without asking, and we don't like the Romney campaign."

Plus, there can be a big cost associated with using a hit song to promote a campaign.

John McCain said in 2008, though he was a huge ABBA fan, he gave up on using one of their tunes at his campaign events.

"It's more difficult to play 'Let's Take A Chance On Me' than I thought," McCain said at the time, according to Reuters. "It gets expensive in a big hurry and if you're not careful you can alienate some Swedes."