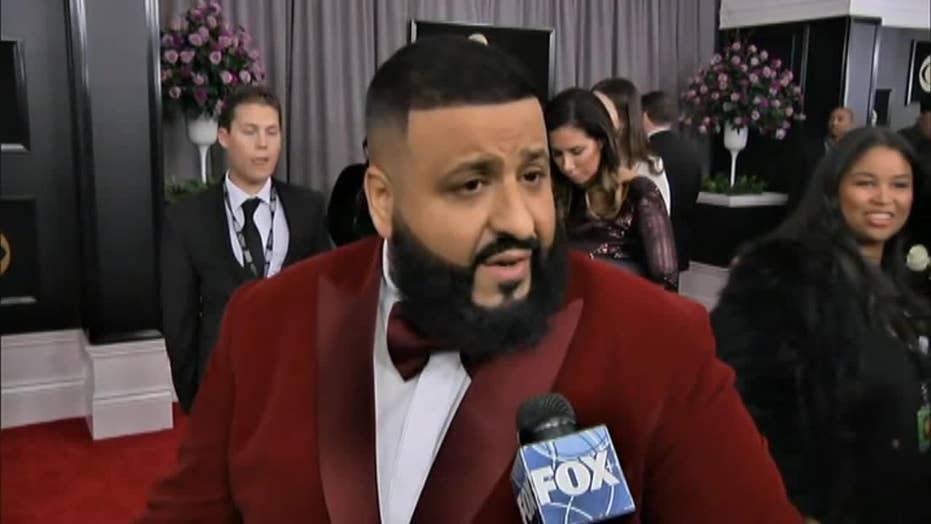 DJ Khaled calls 'The Four' 'the biggest show on TV'

Raw video: Rapper and record producer talks to Fox News on the red carpet at the 60th Annual Grammy Awards.

DJ Khaled's 2018 is off to a great start. The rapper, producer and now TV star, talked to Fox News about his television show debut and one big lifestyle change.

“‘The Four’ is the biggest show on TV,” Khaled told us of the music competition show he judges on Fox.

On Sunday, Jan. 28, the music mogul told Fox News on the 60th Annual Grammy Awards red carpet that the newest of the talent show, “The Four,” is a game changer. New episodes air on Thursdays.

When asked what it was like to work with his new “Four” family,  Khaled said, “My relationship with the other three judges is amazing – first of all Diddy is my brother – for real.  You know what I’m saying? Somebody I’ve been friends with for a long time and that I look up too.”

The rapper went on to say that he has also shares a close bond with Walk, Trainor and the show’s host, Fergie.

He spoke to us before allegations of sexual harassment emerged against Walk.

Khaled with son Asahd on the Grammys red carpet. (Reuters)

“Charlie Walk has been a friend of mine for a long time. Almost 12, 13 years. Meghan Trainor – I worked with her on my last album and she’s [an] amazing songwriter and an amazing person. Just being able to work with a great team – as well as Fergie. Man, I love Fergie she’s an icon, you know? I’m blessed to be able to work with the greats,” Khaled to us.

Each week on “The Four,” four singing contestants are invited to challenge the reigning four contestants in a competition to win a spot to compete. Similar to other talent shows, the judges will give their two cents on who they feel deserves to stay in the four.

But in addition to working on his new show, Khaled has also been working on another major project – losing weight. The actor talked to Fox News about becoming a spokesperson for Weight Watchers.

“Man. Weight Watchers is going good,” he told us. “The freestyle program is doing real big. It’s a real lifestyle because all you have to do is not go over your point [total]. And there are so many zero points [foods] in case you get hungry. I got the freestyle dance.”

The rapper then celebrated his big weight loss news with a little red carpet dance and said, “Right now, the last weigh in as like 26 pounds. I got rid of – I don’t lose. All I do is win – you know what I mean.”