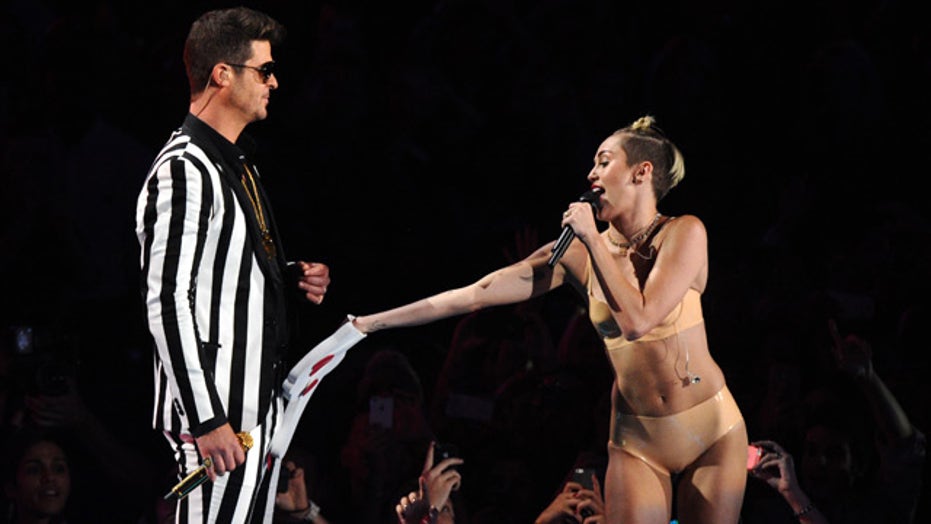 LOS ANGELES – Audiences across the country let out a collective “oh Miley” sigh during the MTV Video Music Awards on Sunday night, as Cyrus, 20, gyrated and “twerked” provocatively around the stage while Robin Thicke sang “Blurred Lines” – stripping down to a nude bikini, thrusting anything that moved, holding a giant foam finger to her crotch and sticking her tongue out as if it no longer fit in her mouth.

“Robin is pissed,” an inside source told FOX411’s Pop Tarts column. “She was all over him, much more so than anything that was rehearsed.”

However, Thicke likely isn’t the only one less-than-impressed. Chances are Disney-- the mega family-friendly brand that nurtured Cyrus as a teenage superstar, shut down its Disneyland park for the first-time ever so she could host a Sweet 16th Birthday bash in 2008 and made “Hannah Montana” a household name--- isn’t so thrilled about being connected to the risqué songstress either.

“When Walt Disney was running the company, it would have been unthinkable that a former Disney star would go this route,” said Melissa Henson, director of communications and public education for the Parents Television Council.

Indeed, during his time as head of the brand, Walt Disney was strict with his former child stars. Annette Funicello, for example, honored the creator's wishes that she not dress provocatively long after she left the Disney brand.

“I can’t imagine any parent, knowing what Miley’s current stage persona is, letting their child get too attached to the ‘Hannah Montana’ character. So for that reason, Disney may find themselves forced to retire the character all together."

Even though the wildly popular series – which premiered with an unprecedented 5.4 million viewers and peaked with 10.7 million – ceased production in May 2010, the Disney website still offers online clips, games and activities for fans related to the “Hannah Montana” series on its website, but it no longer sells merchandise other than DVDs. No reruns currently appear on the Disney Channel schedule for the television series, but “Hannah Montana: The Movie” is scheduled to air on both Wednesday and Thursday this week.

And MTV, which is also known as the world’s premier youth entertainment brand, certainly reaped the rewards. In a press release issued Monday, the network proudly announced that the Moonman granting show garnered a total audience of 10.1 million viewers, a 66 percent increases on 2012 and a telecast ratings jump of 47 percent compared to last year. According to Twitter, Miley Cyrus set a new Twitter record for tweets per minute during her scandalous showdown, racking up a whopping 306,000 tweets per minute.

Not surprisingly, Cyrus’s team from RCA Records bounced off the surge in interest and issued a release announcing that her new album entitled “Bangerez” will be released on October 8, and that is marks “a creative evolution for Miley.”

Yet this certainly isn’t the first time Cyrus has gone above and beyond to prove that she’s “a grown woman now!” The entertainer caused a stir back in 2009 when she donned short shorts and flung herself around a stripper pole during the Teen Choice Awards – when her Disney program was still on the air. (The network was quick to distance itself from the jaw-dropping performance, insisting that all content it airs is age-appropriate).

Even though Cyrus is clearly rejecting the notion of being a tween/teen idol, other experts have suggested that she is still longing for the same level of fame and admiration she held as a sweet, smiling and baby-faced young beauty.

“It was an absurd act of desperation,” noted Nicole Clarke, former model turned educator and filmmaker on media manipulation. “Hopefully teens will not emulate her absurd behavior and take this as a lesson.”

However, well before Cyrus’s wild ways became her norm, the Hollywood heavyweight rejected the notion of being anyone’s idol.

“An idol for me is someone you want to replicate, you want to be them and I don’t wish that on anyone to lose what they have personally," Cyrus told us in 2009 while promoting her “Hannah Montana” movie.  "What I think people like about me is that I don’t try to change, I haven’t let what I do for a living become my life and completely affect me.”

And whether you liked her VMAs dirty dancing or not, a source connected to the star said the backlash comes as no surprise.

“Everyone is talking about her,” added the insider. “She’s smarter than you think.”

Reps for Disney, Cyrus and Thicke did not respond to a request for comment.