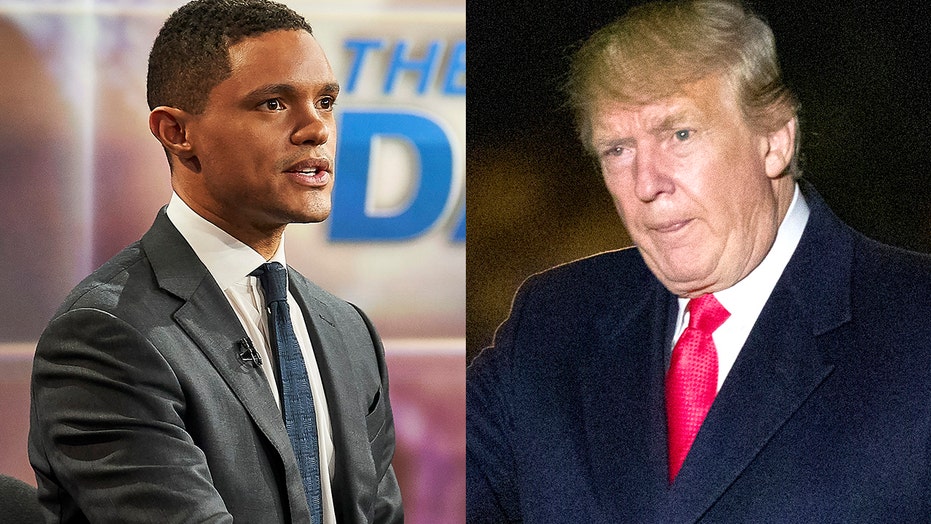 Trevor Noah has a theory about President Donald Trump: The outspoken head of state makes a comedian’s job of writing good jokes “harder.”

“I would never think that Trump is good for us. If anything, I wish he would make us work a little bit harder, because now, as a comedian, I'm like, ‘He did this,’” Noah, 36, told Ellen DeGeneres on Monday during an appearance when asked if he believed Trump to be “a good thing for comedy.”

The funnyman quipped to DeGeneres, 62, that he had already spoken to “almost all 125” of the Democratic presidential nominees -- aside from just three hopefuls who have yet to make a visit to “The Daily Show.”

“We've been lucky,” Noah continued. “I think the only people we haven't had on the show is Elizabeth Warren and Joe Biden – oh, and now Mike Bloomberg because now he's in the race, but everyone else has come to ‘The Daily Show’ and we've had fun talking to all of the Democratic candidates.”

DeGeneres went on to praise Noah’s innate ability to flip a political headline into a comedic delivery that resonates with many different people, adding, “It's a sad, scary place right now, but somehow you make it really funny.”

“When processing politics, the one thing we need to do, in my opinion, is remember there was a time before and there will always be a time after,” the late-night host responded.

“And a lot of time, people tell us to live in the present, but if you're not careful you only live in the present and you act as if the present will be forever, and that is not the case. And so that’s what I try to do is remember for me, politics is what’s supposed to be happening, so I can’t be angry at politics. And then, what I’m trying to do is engage in dialogue that educates people, informs people including myself and gets to a point where we understand each other a little bit more.”

Before exiting, the stand-up comedian shared an anecdote with the daytime talk host about a run-in with a conservative “Daily Show” viewer at the airport on the way to Los Angeles.

“One of the best compliments I ever got – no joke – was on the flight coming out here to LA,” he explained. “There was a guy on the plane and he came up to me and said, 'Hey, my son said I shouldn't bother you but I wanted to let you know that I'm a big conservative guy and I don't agree with a lot of the things you say but you're a funny guy.’”

‘“You're a cool guy and you're funny and I like that about you,” Noah added of the chance encounter. “‘All right, my son said you'd hate me, but thank you very much.’”

“Boy, we have to get back to that right now,” responded DeGeneres to a host of applause.