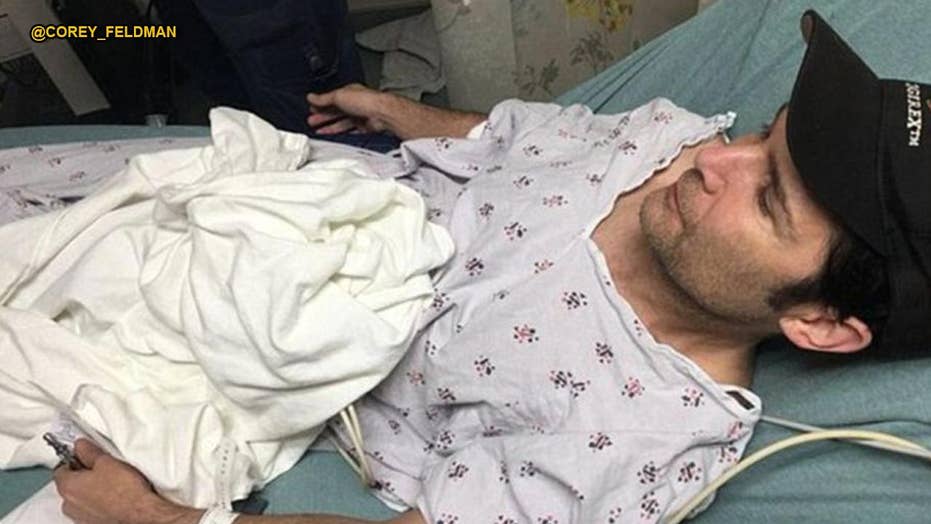 Corey Feldman claims he was stabbed in murder attempt

Corey Feldman stated on Twitter that he was attacked Tuesday night in an incident the actor called 'an attempted murder.' Feldman has recently spoken out against alleged pedophiles in Hollywood, and believes the attack is a result of those allegations.

Corey Feldman claimed he was stabbed with a syringe at the end of last month, but the former child star is ready to get back in the limelight.

Though his rep previously said Feldman was concerned he was “infected with poison or a virus” when he was allegedly attacked, the star tweeted he has been lining up TV appearances, such as an interview on “Access.”

A rep for “Access” confirmed to Fox News Feldman is taping an appearance today with Natalie Morales. The chat is currently set to air later this week.

Feldman also said he secured a spot on “Inside Edition.” A rep for the show said Feldman is not currently set to appear on the program.

He wrote on social media he is doing interviews to promote his upcoming film “Corbin Nash.” According to review aggregator Rotten Tomatoes, the film is a horror flick set for a limited release on April 20.

He tweeted on Tuesday, “OK 2DAY ILL B APPEARING ON @accesshollywod NOT SURE WHAT TIME, OR IF IT WILL EVEN AIR 2DAY!! BUT, I WILL B SHOOTING MY INTERVIEW 2DAY!”

He wrote his appearance may include an update “on my attack.”

He also tweeted on Monday, “ALSO THIS WEEK, I WILL B APPEARING ON @InsideEdition & @KTLAMorningNews 2 PROMOTE @CorbinNashMovie & FINALLY THE FOLLOWING MON THE 16TH WE WILL B HAVING THE BIG HOLLYWOOD RED CARPET PREMIER OF THE FILM, & THEY R SELLING TIX 2 THE PUBLIC, SO CHECK IT OUT @TheMontalban IN HOLLYWOOD.”

One follower replied that Feldman, 46, was appearing to bounce back quickly from the stabbing attack he said he endured on March 27.

“Should I stay locked inside withering away, in fear that the 10% chance I was poisoned comes true?” he fired back. “That sounds like they won. I would never go down like that! I’ll keep standing TALL, & keep on fighting the good fight, until the bitter end, which hopefully will b decades away!”

Following Feldman’s statements on social media in late March, the LAPD denied the star’s claim that police were investigating the incident as an attempted murder. A spokesperson for the LAPD told Fox News police found "no lacerations to his abdomen" following his claims.

Feldman then posted a zoomed-in image showing what he said was a small syringe puncture wound.

The former “Lost Boys” actor is adamant that he is being targeted for his past threats to speak out about pedophiles in Hollywood. The actor has publicly stated he was molested by powerful people in the entertainment industry when he was an '80s child star. He has said his close friend ‒ the late Corey Haim ‒ was raped when he was a child by the same industry predators.