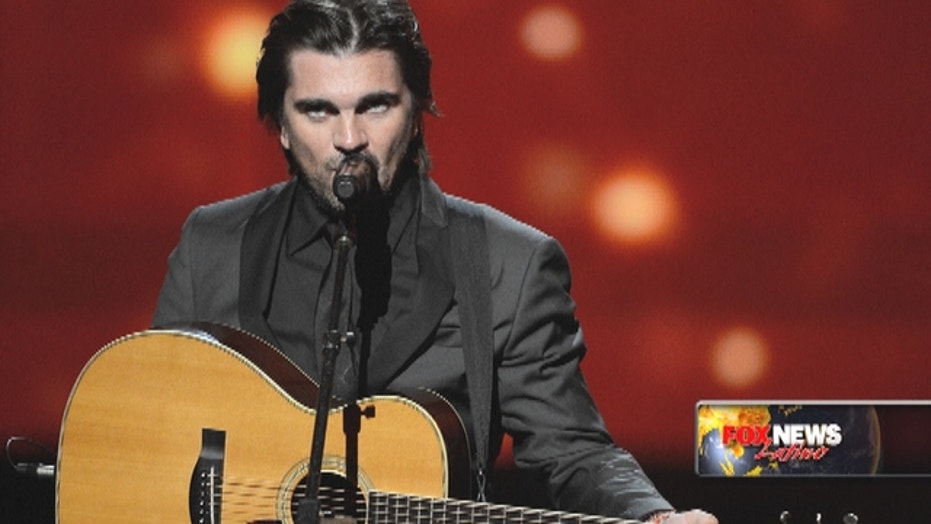 Juanes to sing at the Grammys, en Español

Latin rock star Juanes will be singing again at the Grammy Awards, but this time it will be a song of his own, in Spanish.

MIAMI (AP) – Latin rock star Juanes will be singing again at the Grammy Awards, but this time it will be a song of his own, in Spanish.

The Colombian singer-songwriter, who in 2013 sang an English-Spanish version of Elton John's "Your Song," says appearing on the telecast again on Sunday is like a dream come true.

"I'm very excited. I can't believe this is going to happen. You know, I've been waiting for this moment for many years and we are very excited now that it's about to come, to happen," Juanes told The Associated Press on Monday in an interview at his recording studio in Miami, where he lives.

"We are going to perform a new song called 'Juntos,' or 'Together,' the song that we made for the Disney movie 'McFarland, USA,'" he added. "So, yes, we're rehearsing and practicing a lot, and just ... (getting) ready for that big night."

It may be the biggest Latin moment at the Grammys since Jennifer Lopez and Marc Anthony sang "Escapemonos" 10 years ago.

"A two-time Grammy and 20-time Latin Grammy winner, we are thrilled that current nominee Juanes has been added to the exciting lineup of artists performing at the 57th annual Grammy Awards," said Neil Portnow, president/CEO of The Recording Academy, in an email to The Associated Press.

Juanes, nominated for best Latin pop album with "Locos de Amor," sees the telecast as a "big window," as "something very special" that will allow him to connect with many people and once more be among other musicians like him.

He said that when he saw "McFarland, USA" in Los Angeles, after Disney Studios contacted him to ask if he could write a song for the movie, he liked it so much that he accepted.

"It touched my heart in a very positive way, in a very deep way," he said. "It's a very inspiring story."

The movie, starring Kevin Costner as a cross-country coach in Bakersfield, California, follows a group of young Latin American immigrants that through very hard work get to be championship contenders. It opens Feb. 20 in the U.S.

"The inspiration (for the song) comes from the movie itself, the idea that when people work together and when people believe in ... (each) other anything can be possible," said Juanes, who co-wrote it with fellow Colombian Fonseca and Cuban Descemer Bueno, under the production of renowned Dominican singer, songwriter and producer Juan Luis Guerra, also a Grammy winner.

Juanes is working on a new album. He plans to go on tour next year around the U.S. and Latin America.

The 57th annual Grammy Awards will air live from the Staples Center in Los Angeles on CBS.