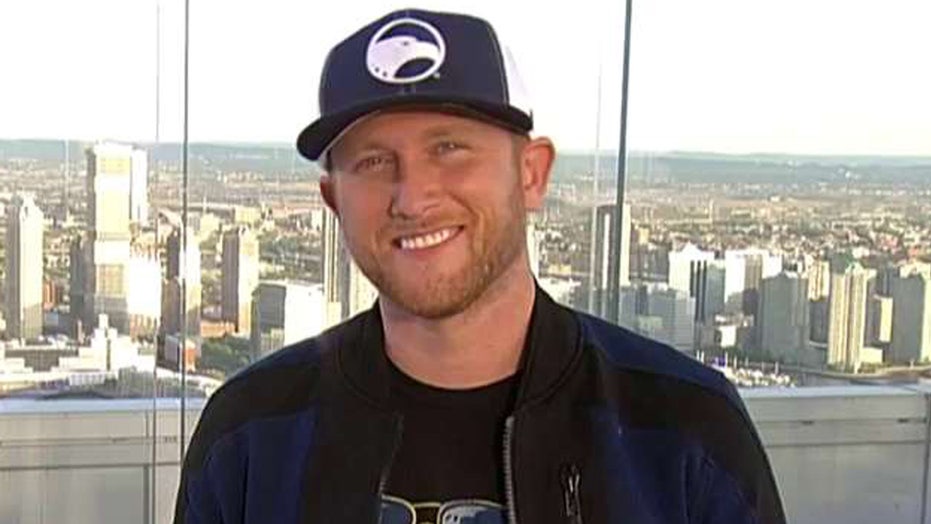 Cole Swindell showed off a gruesome eye injury during Dierks Bentley‘s show in Panama City, Fla., last weekend. The singer showed fans his black eye, and later posed with Bentley for a photo for everyone to see.

Swindell’s right eye is puffy and three shades of purple. It’s barely open, but he’s smiling in the photo with Bentley. During the show, he said was protecting Bentley’s reputation from a critical fan, but as you’ll see in the above video, the real story isn’t quite as dramatic.

The Georgia native performed “Chillin’ It” and “Wish It Would Break” with Bentley, specifically requesting the latter — an album cut from Bentley’s debut album — because he’s a huge fan of the song. Others like Randy Houser were in attendance during the show at Spinnaker Beach Club on Panama City Beach. Fans and select radio outlets gathered to hear new music from Bentley’s "Black" album. Taste of Country Nights heard Swindell say he’d in fact had an unfortunate encounter with a coffee table. Swindell’s reps confirmed that he had indeed fallen and hurt himself.

Swindell is a part of Florida Georgia Line‘s Dig Your Roots Tour this summer, but he has several festival shows prior to the duo’s next tour stop. His new single “Middle of a Memory” is the second from the You Should Be Here album. “You Should Be Here” became his biggest song to date, easily continuing his streak of No. 1 hits.

Despite his successes, he tells Taste of Country he still feels like a newcomer. Swindell is a big fan of Bentley’s. The two cut “Flatliner” together for Swindell’s album after the 32-year-old wrote it years ago.

Cole Swindell's black eye - How did he do it?