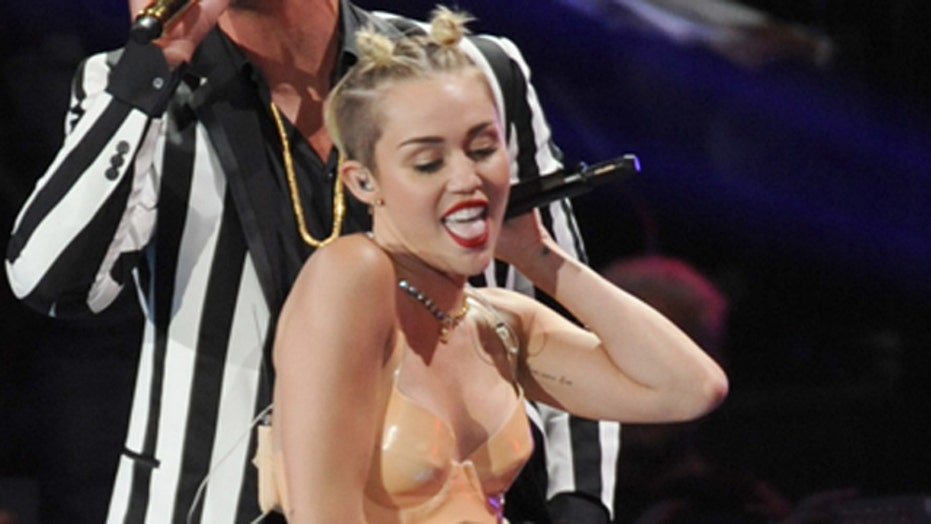 Who is Cher to talk to Cyrus?

Stars are weighing in on Miley Cyrus' antics, but should they really just butt out?

Cher was anything but innocent during her younger years, but the veteran songstress has still made it known that she’s not impressed by Miley Cyrus’ recent controversial behavior. Though Cher was once known for sporting barely-there costumes and putting on shocking performances, she told E! that in her opinion, Cyrus’ VMAs performance, well, just wasn’t very good. “I don’t give a sh*t if she comes out naked.  Just be better, do better.”

Should Cher really be chiming in?

Executive editor at Maxim Magazine Patrick Carone told FOX411’s In the Zone 20-year-old Cyrus should be appreciate that a pop legend, like Cher, is paying attention to her.

“I actually think that Miley Cyrus should be happy that Cher is weighing in even though what Cher said is not entirely complimentary. Cher is beyond an icon and she knows what she’s talking about,” Carone said.

He added that since Cher has some experience with controversy, Cyrus would be wise to take her advice.

“I think that Miley should listen to Cher. There’s probably a handful of people who have a right to opine on this kind of topic, but I think that Cher really is one of them.”

Plus it’s not unusual for celebs to share their thoughts on what other stars are doing, senior reporter at HollywoodLife.com Chloe Melas explained.

“…There are a lot of very seasoned celebrities who offer up advice to young Hollywood celebrities all of the time and actually that’s great. You have people like Robert Downey Jr. for instance, who has battled his own drug and alcohol addictions, and he’s always giving advice to younger stars,” Melas said. “Even Charlie Sheen with his ‘winning’ and all of his escapades, he’ll offer up advice for people. A lot of these celebrities like Miley Cyrus or Lindsay Lohan, who are making headlines for all of the wrong reasons, should really look up to their icons as role models and take some advice.”

“I think Miley will do what she wants,” Carone said. “She’s a very smart woman, a very intelligent young woman, and she’s extremely savvy. I think that people might be under the impression that she does things haphazardly, but the fact of the matter is she’s built an incredible career since she was a small girl, you know, acting and singing and performing, and she really knows what she’s doing. I think it’s good for her to listen to Cher, to hear what other people like Cher have to say but if she decides to take that advice or just let it brush by her, you know, that’s her decision.”

Melas cautioned that if Cyrus doesn’t listen, her party-girl image may get out of hand.

“Miley Cyrus claims that all of her behavior and her MTV VMA’s performance was very perfectly calculated because she was trying to make headlines and also promote her new album…  Miley [may have] gone off the rails a bit, but she definitely needs to reign it all in. Think about her long-term image… How is she going to sustain such a wild side for so long?”