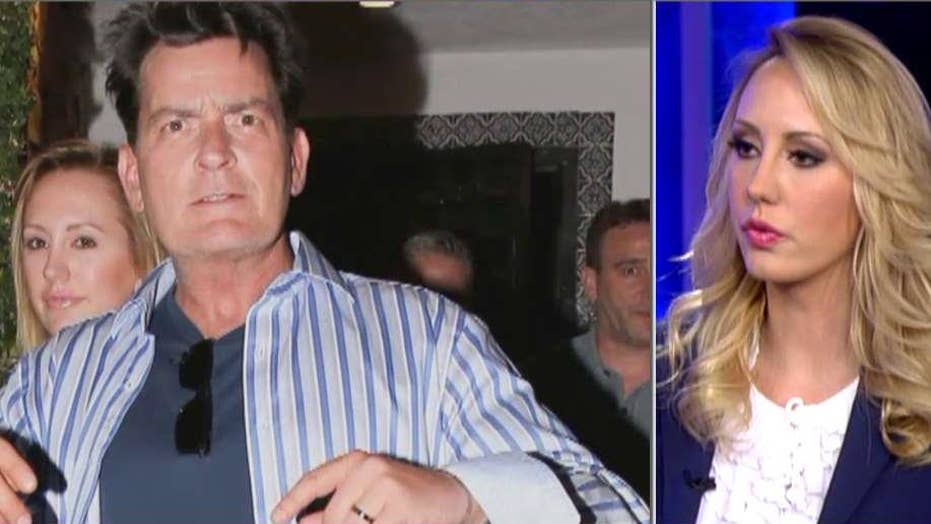 Ross, a former adult entertainer who goes by the name Brett Rossi, says first met Sheen in November 2013 and agreed to have sex with the actor for $10,000. She told FOX411 she then had sex with Sheen for months before finding HIV medication in his medicine cabinet.

Sheen said on the “Today Show” in November that he told all of his sexual partners about his HIV status before sleeping with them.

“If he would have told me from day one, from the first time that we met, there would have never been a relationship,” Ross said. “I never would have been sexually active with him.”

She said she stayed with him after finding out he was HIV+ because he promised a normal, family life, complete with children. She also says she was in love.

Ross said that changed when she told him she was pregnant with his child.

In the complaint obtained by FOX411, Ross, 26, says she became pregnant in March 2014 and Sheen, 50, “became extremely upset.” She says he told her he didn’t want his child to have his “HIV-positive” blood type and asked her to have an abortion. When she refused, he “erupted into a fit of rage” and threatened to “kick her to the curb.”

“Toward the end of our relationship, I’d say July, 2014, he went on this bender, and I had never seen him in such a state, and we went through some really hard times. He was a completely different person. I mean, I saw Charlie as Carlos, we lived and acted as husband and wife,” she said, referring to Sheen’s given name. “When he started using, he became, ultimately, the Charlie Sheen that everyone knows. It was shocking to me because I only know Carlos, so seeing this Charlie Sheen character was like a Jekyll and a Hyde.”

She said the drug use also led to him missing some of his HIV medications.

“When he used – and I’m not talking drinking, I’m talking drugs – in the beginning, yes, he was diligent, but it got to a point where you’re so high on crack cocaine that you don’t know what’s up what’s down, if you’ve been locked in your room for three days or three weeks,” Ross said. "He would tell me that he was taking his medication, but I was the one who filled up his medication every week. He was not taking it on a regular basis when he was high.”

Ross said she hoped telling her story, and pursuing the lawsuit, would embolden other women who have felt powerless.

“If I, the fiancee, speaks up and leads a pack, then maybe it gives other people strength,” she said.

Ross’s lawsuit was filed one day after Sheen was supposed to pay her $1 million to settle all claims against him under a draft agreement that the actor never signed, according to the court filing.

Ross said she was not extorting the actor, though she had witnessed others do so.

She also said she has not tested positive for the HIV virus.

Sheen's lawyer Martin Singer told FOX411 his client "intends to vigorously defend the lawsuit filed by Scottine Ross. We are confident that Mr. Sheen will prevail in this action and will prevail on his claims for affirmative relief against her."

The document details many incidents in which Sheen allegedly lost his temper and threatened Rossi including a June 2014 incident where Rossi alleges the actor pointed an unloaded gun at her and repeatedly pulled the trigger. The documents also describe a time when Sheen threw a cement pillar at her but it missed and broke a glass door.

The "Two and a Half Men" star publicly disclosed he was HIV positive on the "Today" show last month. He also vowed during the appearance that he would not to pay to settle any claims from sexual partners claiming he exposed them to the virus that causes AIDS.