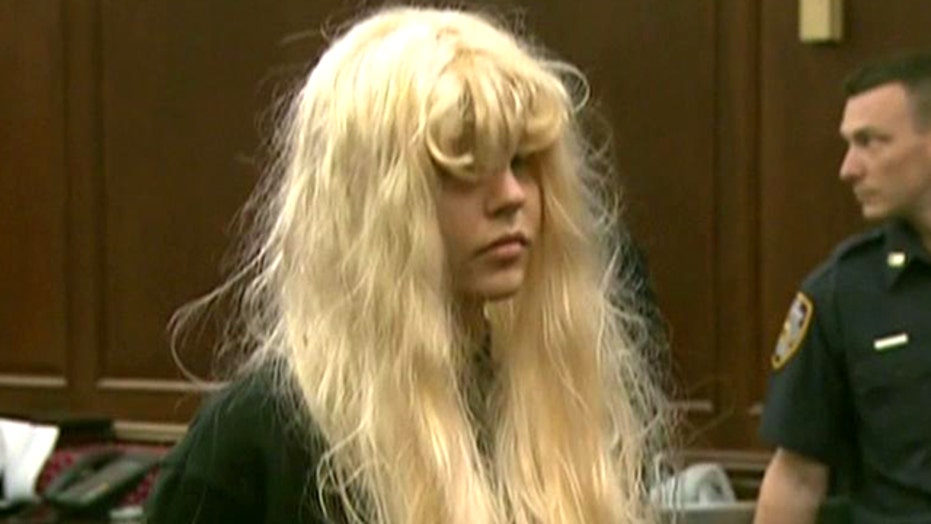 The troubled actress was released from police custody after she appeared in a New York court on Friday morning, the Manhattan District Attorney's Office confirmed to FOX 411.

Bynes was released on her own recognizance-- meaning she did not have to post bail-- and she will have to appear in court again on July 9 to address her latest legal woes.

Police say the actress was arrested in midtown Manhattan after she heaved a marijuana bong out of a window.

The officers went to her apartment on the 36th floor where they said they saw heavy smoke and a bong sitting on the kitchen counter. They said she tossed the bong out the window in front of them, prosecutors said.

She then said to police: "It was just a vase," according to Manhattan assistant district attorney Chikaelo Ibeabuchi.

"My client completely denies illegally throwing anything out of her window," said Andrew Friedman, her attorney for the arraignment.

Police say a building official called police to complain that Bynes was smoking marijuana and rolling a joint in the building's lobby.

An NYPD spokesperson told FOX 411 the actress was then taken to Roosevelt Hospital to be evaluated.

A source connected to the situation told FOX411 that while a full preliminary psychiatric evaluation was performed on Bynes, professionals found no reason to keep her on a medical hold.

“She was acting crazy, but there is no law against being crazy in the United States and they can’t hold you for that. She is not suicidal, and not considered to be a danger to herself or society,” explained the insider. “They really tried to find a way to hold her, but no avail. Amanda isn’t a dangerous girl, she seems desperate for attention and really acting out.”

After the evaluation, Bynes was taken the police station, where she spent the night.

She pulled up to court Friday morning in a squad car where she was greeted by a crush of media. She was also charged with attempted tampering with evidence and unlawful possession of marijuana, all misdemeanors.

"I'm asking you I don't want any pictures," she said to a photographer.

"I don't want any photos. No press are allowed in here," she announced to the public courtroom.

Bynes has gotten plenty of attention in recent months for her bizarre behavior. The 27-year-old is almost unrecognizable in recent photos, which show her with bleach blonde hair and shiny cheek piercings. She has been keeping fans up to date on her latest antics via Twitter, and she recently gained many followers after she posted a shockingly vulgar tweet about rapper Drake.

Bynes first began acting in commercials at the age of 7 and was thrust into the limelight when she later became one of the stars of Nickelodeon’s comedy show “All That.” She then starred in Nickelodeon’s “The Amanda Show” from 1999-2002. Since then, her acting career has waned, and her last major role was in 2010’s “Easy A.” Before that she appeared in films like “What a Girl Wants” and “Hairspray.”

The starlet has said that there is “NOTHING wrong” with her and that she plans to launch a fashion line.

Fox's Hollie McKay and the Associated Press contributed to this report.