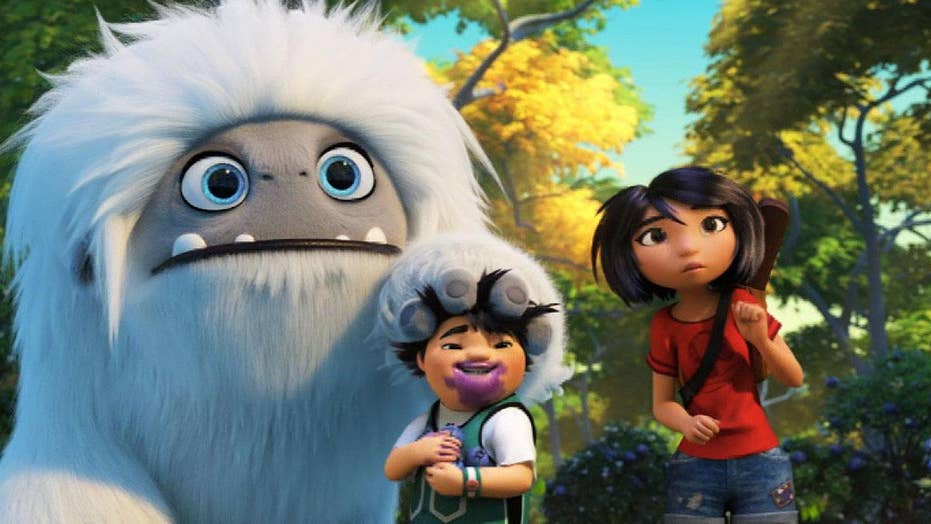 The animated family film 'Abominable' follows a Shanghai teenager who embarks on a journey to Mount Everest to help reunite a young yeti with his family.

The DreamWorks animated adventure "Abominable" topped the box office with $20.9 million in ticket sales over the weekend, according to studio estimates Sunday, while the Renee Zellweger-led Judy Garland tale "Judy" got off to a strong start.

"Abominable," the weekend's sole new wide release, is a co-production between Universal's DreamWorks and the Shanghai-based Pearl Studios. So the $75 million film's performance when it opens Tuesday in China will be vital to its worldwide success.

The film, written and directed by Jill Culton, is about a Shanghai teenager (Chloe Bennet) who discovers a lost yeti on the roof of her apartment building. She and a pair of friends traverse China to return the creature, whom they name "Everest," home to the Himalayas. "Abominable" garnered positive reviews (80 percent on Rotten Tomatoes) and a warm reception from audiences (an A CinemaScore) eager for a family-friendly option.

"Abominable" marks the seventh No. 1 film this year for Universal, or eight if you count "Downton Abbey," released by the studio's specialty label, Focus Features. "Downton," last week's top film, slid to second with $14.5 million. The big-screen encore for the British series has already grossed $107.1 million worldwide.

That gives Universal the most No.1 movies of any studio this year, passing Disney. Though Disney still commands an overwhelming market share of about 34 percent, Universal has had a strong year with a varied slate ("Us," ''Hobbs & Shaw," ''Yesterday"). The studio accounts for all three of the year's No.1-debuting original releases: "Abominable," ''Us" and "Good Boys."

This image released by DreamWorks Animation shows Everest the Yeti, left, and Yi, voiced by Chloe Bennet, in a scene from "Abominable," in theaters on Sept. 27. (AP)

'IT: CHAPTER TWO' SCARES UP MAJOR BUCKS AT BOX OFFICE

"It's not going to be all superheroes all the time. That's not necessarily going to be everyone's cup of tea," said Jim Orr, distribution chief for Universal. "When we have films like 'Abominable,' 'Yesterday,' 'Good Boys,' 'Us,' we're bringing a lot of different people into the theaters and that's good for everyone. That's good for the entire industry."

It's been a good run for original films lately at the box office. The stripper drama "Hustlers," from STX Entertainment, continued to hold strong with $11.5 million in its third week, dropping just 32 percent. It's now made $80.6 million altogether. "Hustlers" potentially got a boost by having its star — Jennifer Lopez — announced this week as next year's Super Bowl halftime act, along with Shakira.

And one of the weekend's biggest successes was "Judy," which opened with $3.1 million on 461 screens. The film, directed by Rupert Goold, is about the final act of Judy Garland's life, when the "Wizard of Oz" star was plagued by drug addiction, health woes and financial troubles. The film's main draw is Zellweger's lauded performance as Garland, which has made her the best-actress Oscar front-runner.

Roadside Attractions rolled out "Judy" with a rare medium-sized platform release that the distributor has found success with before on films like 2012's "Mud" and this summer's "The Peanut Butter Falcon." The latter is a Mark Twain-inspired adventure starring Zack Gottsagen, who has Down syndrome, and Shia LaBeouf. This weekend, it became the year's top indie platform release with $18.1 million over eight weeks, passing A24's "The Farewell."

Howard Cohen, co-president and co-founder of Roadside, says the 16-year-old distributor has succeeded by seeking populist indies. ("Judy," for which the audience was almost 80 percent over the age of 35, will expand nationwide further next week.)

'JUDY' DIRECTOR SPEAKS OUT ON CRITICISM FROM GARLAND'S FAMILY

"It's a very challenging time in film distribution for indies and everyone but Disney, maybe," said Cohen. "We like movies that can draw an audience, that are crowd-pleasers. In a challenging environment, you have to give people a really strong reason to leave their house."

"The movies have to be properly released and promoted," he added. "But I think the audience is still there."

The two-and-half-month break from superheroes atop the box office is expected to end next weekend when Warner Bros.' "Joker" hits theaters, along with Fox Searchlight's "Lucy in the Sky" and Netflix's "Dolemite Is My Name."